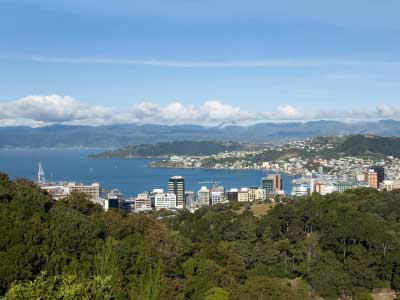 ­The luscious green lands of New Zealand are well known by moviegoers who saw the "Lord of the Rings" movie trilogy. But Wellington is also making its mark on the map as one of the world's well-known wine regions. If you've ever wanted to journey to this enchanted island country but don't have the cash, you can simply pick up one of their whites or reds and bask in the experience.

New Zealand is comprised of two islands. The south end of North Island is where you'll find Wellington. This location is extremely convenient for wine makers because of its proximity to Australia and the inter-island ferries that carry passengers between the North and South Islands. Wellington dwellers have the immense benefit of convenient international and region travel. Also, all roads on the North Island literally lead to Wellington [source: WellingtonNZ].

­The Wellington region is comprised of five areas. Each of these areas offers its own special delights: Lower Hutt (or Hutt City), Upper Hutt, Porirua, Kapiti Coast and the Wairarapa.

The interesting thing about Wellington's wine regions is that Wellington itself is not a wine-producing city [source: WellingtonNZ]. Instead, it's the center of five regions (stretching over the two islands) that make up New Zealand's wine trail. The wine trail includes: Hawke's Bay, Tararua, Wairarapa, We­llington and Marlborough [source: Classic New Zealand Wine Trail].

Wairarapa is a 90-minute drive from Wellington, and here you'll find what is known as Wellington's true wine region [source: WellingtonNZ]. Wellington and Wairarapa are the focal point for great wines in New Zealand. In this article, we'll explore the Wellington wine region's history and culture, its agriculture and its famous New Zealand wines. Read on to learn the history of this fruitful land.