How bad for you is high-fructose corn syrup?

Browse the article How bad for you is high-fructose corn syrup? 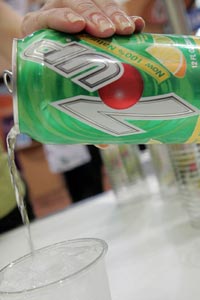 The makers of 7Up, which includes high-fructose corn syrup as an ingredient, dropped their claim that the product was "all natural" after being threatened with a lawsuit by a consumer advocacy group.
Scott Olson/Getty Images

If you want to cut down drastically the amount of processed food you eat, don't buy anything that has high-fructose corn syrup (HFCS) in it. Unfortunately, you'll have to have a strong liking for the taste of lettuce and notebook paper, because HFCS is in nearly everything: jelly, juice, sodas, whole-grain breads, cereals, ketchup, crackers, yogurt, sweet pickles, applesauce, salad dressing, ice cream, cough syrup and lots more.

So what is it? First, let's take a look at fructose. Fructose is a naturally occurring simple sugar that's produced by many plants. It's very sweet, and it's more soluble in water than glucose, another simple sugar that's also made readily available by nature and is the body's main source of energy. Fructose and glucose have the same type of atoms but are put together differently. When you combine fructose with glucose, you wind up with sucrose, which is your basic table sugar.

Corn syrup is a glucose-heavy syrup made from corn starch. There's no fructose in corn syrup -- not naturally, at least. In 1957, researchers discovered an enzyme that could turn the glucose in corn syrup into fructose. This process was modified and improved upon in the 1970s, making it possible to mass-produce HFCS. The entire process involves several steps and three different enzymes, but eventually a syrup with around 90 percent fructose content is created, and this is blended down with untreated syrup (containing only glucose) into a mix of either 42 percent or 55 percent fructose. The rest is glucose.

Knowing that it tastes delicious, should we go ahead and assume high-fructose corn syrup is also incredibly bad for us? Many people think it is, pointing to the rise in obesity and diabetes that seems to have mirrored the rise in consumption of HFCS. Critics point ou­t that it's not a natural form of fructose and that the availability of cheap sweetener led to the supersizing of individual servings, such as 64-ounce sodas. Those on the other side point out that HFCS helps keep food prices low and is deemed "safe" by the Food and Drug Administration (FDA). Furthermore, table sugar is 50 percent fructose and 50 percent glucose, so there's only 10 percent more fructose in most HFCS. 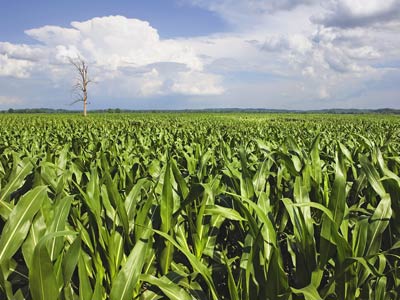 So where is all the corn coming from? Throughout the past century, the U.S. government has supported its farmers through subsidies to ensure that the United States' domestic food production continued to grow. Growers of corn, in particular, have been rewarded for producing more and more corn, regardless of whether the excess could be put to use. As a result, the United States grows and consumes more corn than any other nation on earth [source: Corn Refiners Association].

Improvements in the ability to process HFCS were welcome news to the corn industry and the soft drink industry -- the former had a new outlet for its stock, and the latter could save hundreds of millions of dollars by switching to HFCS from the slightly more expensive sugar. The Midwest was literally covered with the raw materials, and soon more than a dozen large HFCS processing plants sprang up in the region to handle the growing demand for the sweetener.

In 1970, more than 83 percent of sweetener consumed in the United States was sucrose. By 1997, that number had dropped to 43 percent, and the rest of the sweetener being consumed -- about 57 percent -- was HFCS [source: OU Kosher].

The problem with this change in consumption is that studies have shown that when people consume artificial sweeteners, they have an increased desire to continue eating [source: Tordoff]. This occurs with all sweeteners, and it doesn't seem related to the way the body metabolizes the sweetener, but rather the taste of sweetness.

In a study of 1,400 middle school students, it was found that nearly one-third of their caloric intake was added sugars (as opposed to the sugars found naturally in fruits and vegetables, which aren't normally counted when discussing sugar intake) [source: Havel]. In 2005, Americans each consumed, on average, more than 42 pounds (19 kilograms) of high-fructose corn syrup [source: Corn Refiners Association]. The average American also consumes 200 daily calories from HFCS, which is close to 10 percent of all daily calories consumed.

­Obesity rates have been climbing in the United States since the 1980s [source: CDC]. In 2007, Colorado was the only state with less than 20 percent of its population qualifying as obese. Additionally, between 1994 and 2004, new diagnoses of type-2 diabetes increased by 23 percent [source: Gardner]. Many people believe that HFCS plays some role in the obesity and diabetes epidemics now plaguing the United States and much of the world. We'll take a look at how HFCS may play a role in these unhealthy trends in the next section.

High-fructose Corn Syrup Health: It Always Comes Back to Moderation 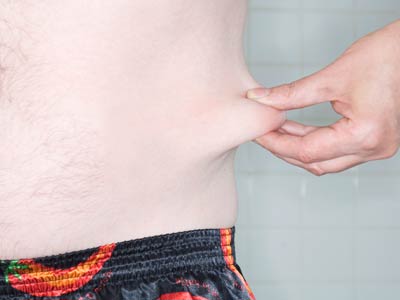 ­In small amounts, HFCS shouldn't be any more harmful than regular sugar. The fructose in HFCS, though modified from glucose, is structurally and in all other ways the same as natural fructose. Additionally, HFCS has nearly the same makeup of fructose and glucose as table sugar (most HFCS has 55 percent fructose, compared to 50 percent found in table sugar). But there does seem to be a connection between the use of HFCS and obesity and type-2 diabetes, so what gives?

First off, that additional 10 percent of fructose content does make a difference in caloric intake, especially since HFCS is found in so many products. Imagine a world in which all sugar has been replaced by HFCS (not a far stretch): You could eat the exact same foods, but you would be consuming 10 percent more sugar.

Unlike glucose, which is metabolized a number of ways by your body, fructose is only metabolized by your liver. When the liver receives more fructose than it can handle, the excess sugars are turned into fats in the form of triglycerides, which are harmful to your arteries and your heart.

There's much to be learned about how our bodies react to fructose, but researchers do know that fructose doesn't stimulate production of insulin, leptin or ghrelin, all of which play a part in telling the body how much it needs to eat [source: Havel]. Without receiving these internal signals to stop eating, it becomes that much easier for us to continue chowing down on that pint of double-chocolate fudge ice cream.

The biggest problem is that HFCS is being added to food items that don't normally have sugar and that you wouldn't even describe as sweet -- crackers, for instance. So, not only are we chugging down lots of sugars with our sodas, but your PBJ sandwich could have HFCS in each of its three ingredients. Meal after meal, day after day, all of this extra sugar adds up, and that, and not necessarily the qualities of HFCS itself, is likely one reason why rates for obesity and diabetes have climbed since the introduction of HFCS. (Other factors are in play as well, such as decreased activity and exercise levels and increased fat consumption.)

So what can we do? Well, for starters, do everything you're already supposed to do. Get regular exercise, watch your fat intake and get regular medical checkups. Next, it wouldn't hurt to mimic the practices of those strange (and rare) individuals in grocery-store aisles who read the labels of the food they are purchasing. Once you get in this habit, you will likely be shocked to learn just how much of your regular grocery purchases contain high-fructose corn syrup. If nearly all of your food contains concentrated sugars, it stands to reason that you'll be eating too many sugars. And if you want to go crazy, eat some fruits and veggies. You'll get all the glucose you need (not much), and these healthier alternatives will take the place of the less healthy foods now flooding our markets and grocery stores.

For more HowStuffWorks articles you might like, from how flavor tripping works to the meaning of the obesity paradox, try the links on the next page.