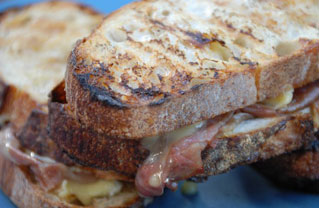 “Panini” literally means “sandwiches” in Italian, but this sandwich, which so commonly shows up on cafe menus around the country these days, isn’t the least bit cut-and-dried. In fact, a panini shouldn’t be dry at all: the classic iteration involves fresh-baked bread (not pre-packaged or sliced), deli meats (such as salami, mortadella, and prosciutto), and cheese (provolone, mozzarella) that are all pressed into one gooey, ooey, moist, and delicious bite.

While food historians can trace a distant ancestor back to a 16th-century Italian textbook, paninis didn’t become popular in Italy until the 1970s and 1980s, at which point they were called paninoteche. In 1980s Milan, sandwich bars were considered fashionable places to hang out—almost status symbols, of sort, where young, chic paninari hung out.