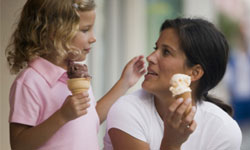 Ah, the ice cream cone -- where cool creamy confection and crunchy treat meet. But who invented it? See more pictures of cool foods and drinks.
Comstock/ThinkStock

You've polished off half a scoop and gotten to your favorite part - where cool confection and cone meet. As you take that first, creamy, crunchy bite, you wonder, "Where did it all begin?" OK - maybe you've never thought twice about the crispy batter cone your slowly melting soft serve sits in, but believe it or not, the origins of this functional treat have been a controversial topic since the beginning of the 20th century. In fact, many accounts trace the beginnings of the ice cream cone to the 1904 World's Fair in St. Louis.

One popular legend tells of an ice cream vendor named Arnold Fomachou whose product was so popular that he ran out of bowls in which to serve his tasty treat. But as luck would have it, his stall stood near that of a resourceful waffle vendor named Ernest Hamwi. Hamwi rolled his product into the shape of a cone, as a container for the ice cream, and voilà, history -- and a tasty treat -- were made. The idea of a portable, edible ice cream cone became wildly popular and soon ice cream vendors all over the fair began selling this ingenious combination.

Another version of the story claims that it was not Fomachou, but rather Charles Menches who ran the famous ice cream stand next to Hamwi's. And still another tells that it was not Hamwi, but Albert and Nick Kabbaz who were responsible for the edible waffle containers. Some even claim that a man named Abe Doumar suggested the idea to Hamwi, or that a man named David Avayou got the idea from vendors in France, who used paper cones. So, what's the real scoop? We perused some patents to see.

The Legal Claim to the Cone

While it seems that many vendors at the 1904 World's Fair were selling ice cream in waffle cones, the idea actually may have been introduced sometime before that event. Another famous claim comes from Italo Marchiony, a New York City ice cream vendor who is said to have been selling ice cream in waffle dishes since 1896. In 1903, Marchiony received a patent for "molding apparatuses as are used in the manufacture of ice cream cups" [source: U.S. Patent & Trademark Office].

But even if Marchiony was selling cones since 1896, he was beaten to the punch in patenting a molding device by a full year. In 1902, Antonio Valvona patented his own "apparatus for baking biscuit-cups for ice-cream" [source: U.S. Patent & Trademark Office].

Shortly after the 1904 World's Fair, several ice cream cone companies emerged and began mass-producing the product. Ernest Hamwi went on to open the Cornucopia Waffle Company and, later, the Missouri Cone Company. Several other cone companies started up as well, including the St. Louis Ice Cream Cone Company, whose president was Nick Kabbaz.

Sometime between 1910 and 1916, the cake cone emerged as an alternative to the rolled waffle. The cake cone was made by pouring batter into a cone-shaped mold, much in the style of Valvona and Marchiony.

Today, ice cream cones come in all shapes, sizes, flavors and even colors. And while the truth about who first placed a scoop of ice cream atop a rolled waffle is still uncertain, we can thank the St. Louis World's Fair for spreading the news and making this inventive idea the staple of summer sweets we enjoy today.