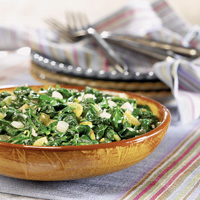 *Chiles can sting and irritate the skin, so wear rubber gloves when handling peppers and do not touch your eyes.

**To toast fresh tomatillos, preheat heavy frying pan over medium heat. Leaving papery husks on, toast tomatillos, turning often, about 10 minutes or until husks are brown and interior flesh is soft. Remove from heat. When cool enough to handle, remove and discard husks.

Two pounds of fresh spinach (about 5 quarts) or other greens such as bagged baby spinach or mixed wild greens can be substituted for the frozen spinach. If using fresh bundled spinach, be sure to trim the stems and thoroughly wash the leaves in several changes of water to remove any sand before chopping.

Anaheim chiles are named for the city in southern California. They are mild and sweet with just a hint of heat. Anaheims are green and have a long, narrow shape. They are available year-round, fresh or canned. Like all chiles, Anaheims are rich in vitamins A, C and E, folic acid and potassium. To toast chiles, heat a griddle or cast-iron skillet over medium-high heat until a drop of water sizzles. Cook chiles, a few at a time, turning occasionally with tongs, until they are blackened all over. (Chiles can also be held directly in a gas flame with a long-handled fork.) Place the hot chiles in a plastic or brown paper bag; let sit 2 to 5 minutes. Remove them from bag then peel them by scraping off their charred skin. Cut off the tops with the seed cores. Cut the chiles lengthwise into halves. With a knife tip, scrape out the veins and any remaining seeds.

Check out more recipes for Mexican