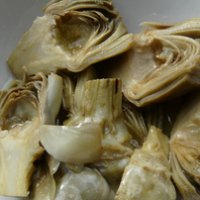 Some people find artichokes daunting. In all honesty, I can see why, given that each artichoke comes with it's own little set of armour. Once you get the hang of them, they really aren't difficult to use at all and they are so much better than canned. It is a bit disconcerting to see how much of the hard outer part is discarded, but then you get to that lovely light green interior and all is well.

I'm quite partial to marinated artichokes, but commercial products are very heavy in oil, and they have a tendency to be over-cooked. This recipe for marinated artichokes sounded so appealing to me, I had to try it. Be aware that when you clean the number of artichokes used for this recipe your fingertips, and especially your thumb will turn a deep maroon colour. It took a day or two wear off, (even with the huge number of times I wash my hands in the kitchen while cooking), so don't make this recipe before an important day, like a job interview or your wedding.

When I scrape out the choke I use a grapefruit spoon with a serrated tip and it works perfectly. Just be careful not to take too much of the flesh away with the choke. Keep the stem on, just removing the very end which will be black. I put the artichokes into a bowl of water with a bit of lemon juice to keep them from discolouring as you finish the rest of them. Oh yes, be careful of the little thorns on the tips of the leaves, they hurt.

This recipe is from Well-Preserved by Eugenia Bone.

Check out more recipes for Vegetable Side Dish