by Sarah Gleim Feb 24, 2016
Some enterprising culinary types are opting for the less expensive food bike instead of the food truck. Lucas Oleniuk/Toronto Star via Getty Images

Move over hipster food trucks. There's a new guy in town, and he's riding a bicycle. Or maybe a tricycle. Yes, it does sound like something straight out of "Portlandia," but chefs, baristas and even brewmasters in  cities across the U.S. and around the world are finding that pedaling their food and drink via bike (no pun intended) can be good for the environment — and their wallets.

In Portland, for instance, you can get everything from tacos and fair-trade coffee to craft beer from a guy on a bike. Here's a shot of the Trailhead Coffee brew bike from their Instagram.

In a city known for its biking culture and for having some of the world's best street food, the food bike makes perfect sense here.

But food bikes are popping up in other cities across the U.S., too, like Nashville, Oakland, San Diego and, of course, Brooklyn, where food trucks are popular but not so much bicycling.

So why this surge in food bikes in these cities, too?

Aside from the fact that they're totally charming, food bikes can provide a would-be chef an awesome alternative to opening an expensive restaurant or food truck.

The study also concluded that clientele can learn more about the food they're eating because they have more direct contact with the chef preparing it. You really can't get that from dining in a big brick-and-mortar restaurant.

Of course, other factors make food bikes a draw: Operators can navigate traffic and the streets to deliver food much faster, and because of their small size, most offer hyper-focused menus with locally sourced ingredients.

While food bikes can suffer setbacks on days with nasty weather, and steering a bike packed with hundreds of pounds of food through neighborhoods with steep hills isn't for the weary, we're pretty sure the food bike is here to stay.

Marijuana Use in Colorado Sending More Visitors to ER Than Residents 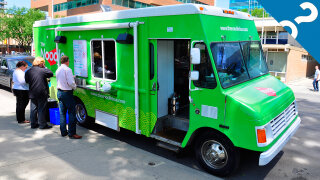 What the Stuff?! Video: 5 of the World’s Best Street Foods