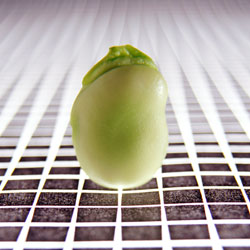 It's a parent's worst nightmare. You're sitting down to dinner when, all of a sudden, your 9-month-old starts having difficulty breathing and begins swelling up around the mouth. Your child just consumed soy and is experiencing anaphylactic shock, an allergic reaction. What most people can eat freely might be fatal to someone with an allergy to that food.

An allergic reaction occurs when the immune system mistakes a perfectly harmless substance for a dangerous one. In response, the system launches a full-scale attack, all the while wreaking havoc on your body. If you're raising a child or even just like giving dinner parties, you should be familiar with some of the most prominent allergenic foods. Catering to someone's special dietary needs could save his or her life.

Not all allergies are created equal, and oral allergy syndrome (OAS) is one of the lesser-known kinds of conditions. It causes your body to interpret certain fruits or vegetables as pollen.

Celery is one of the common culprits that sets off OAS (especially in areas of central Europe). It can make your skin irritated and itchy and causes hives or swelling around your mouth. Other reactions include nausea, asthma and even anaphylactic shock [source: Lawley].

You can cook some fruits and vegetables to avoid these kinds of reactions. But celery can trigger OAS no matter how you serve it. This means that when celery is used in spices and hidden in processed food, such as soups and casseroles, it can still affect someone who's allergic to it. 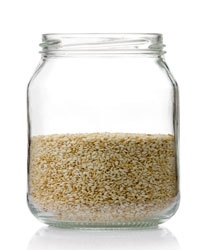 Sesame seeds are tiny, but they can pose a big threat.
Anna Yu/Getty Images

If you live in the United States, you may not have heard of anyone being allergic to the little seeds that speckle your cheeseburger bun. But sesame allergies are very common in places where sesame is more prevalent, especially Japan and China.

A sesame allergy can trigger anaphylactic shock and often causes someone to pass out. In some cases, it can be fatal. Unfortunately, adults who suffer from a sesame allergy aren't known to ever overcome it. So, if you develop the allergy, you should avoid sesame for the rest of your life [source: Emerton].

In the past few decades, sesame has become more prevalent in the United States -- and so has the allergy to it. Experts predict the Food and Drug Administration (FDA) will eventually add sesame to its list of the big eight allergenic foods that require labeling.

Next, we'll explore that notorious big eight list. These eight allergies account for nearly 90 percent of food-related allergic reactions in the United States.

Cow's milk is one the most prevalent allergenic foods around the world, especially for young children. It's estimated that about 2 to 5 percent of children have allergic reactions to cow's milk before they are 1 year old [source: AAFA]. Some doctors tell parents to avoid giving cow's milk to babies until they hit that 1-year-old milestone [source: Sears]. Luckily, most children seem to overcome their allergy in just a few years, after which they can drink milk and have no reaction to it. Occasionally, however, a person won't recover from a milk allergy.

Allergic reactions to cow's milk include hives, asthma and anaphylactic shock. Another common reaction is a condition known as atopic dermatitis, a skin condition that itches and can create a rash.

But don't confuse lactose intolerance with a milk allergy. Intolerance for milk results in indigestion, gas and bloating and doesn't affect the immune system like an allergy does. 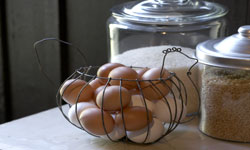 Eggs are a healthful breakfast -- if you're not allergic to them.
MASH/Getty Images

Contrary to the marketing slogan, for many people, the egg is incredibly inedible. Someone could be allergic to either the white or the yolk (or both) -- each contains certain proteins that are known to trigger allergic reactions. These reactions include atopic dermatitis, hives and anaphylactic shock. Another common symptom is allergic rhinitis, a condition often associated with pollen allergies, which involves a runny nose, coughing and headache.

An allergy to eggs is arguably one of the most frustrating to live with merely because so many food products contain them. People with egg allergies must avoid mayonnaise and most baked goods. They should also carefully check the labels of pastas, processed meats, certain drinks (such as root beer and white wines) and candy. If you see any of these ingredients on a label, steer clear: ovalbumin, ovoglobulin, ovomucoid, ovomucin, ovotransferrin, ovovitelia, ovovitelin, globulin, silici albunate, albumin, lecithin, livetin, simplesee, vitellin and lysosyme [source: AAFA].

Peanuts are notorious for causing allergic reactions in people: They're among the most common allergies, and ingestion is likelier to lead to death [source: AAFA]. The allergy is especially common in young children, which is why experts warn against allowing kids to eat peanuts. Although many children overcome their peanut allergy in just a few years, most don't, and they must struggle with it throughout their lives.

If you're allergic and accidentally ingest one, you could develop atopic dermatitis, hives, asthma or life-threatening anaphylactic shock. If you're lucky, you might only experience minor irritation. However, that doesn't mean you're out of the woods. The next time you eat something with peanuts, it could cause a much more serious reaction.

Interestingly, a peanut isn't a nut -- it's a legume. Next, we'll talk about nut allergies. 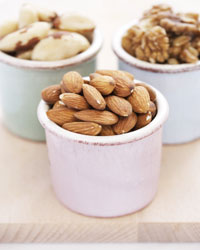 Tree nuts pose an allergy risk even if you don't ingest them.
Martin Poole/Getty Images

People with tree nut allergies tend to suffer from them for their entire life. About 91 percent of children allergic to tree nuts never overcome their allergy [source: FAI]. Besides digestive problems, allergic reactions include asthma, hives, atopic dermatitis and anaphylactic shock.

Among the wide variety of tree nuts, the most common offenders include cashews, walnuts and almonds. Uncommon tree nuts, like kola and shea nuts, are less likely to lead to allergic reactions [source: Brostoff]. However, because people are rarely allergic to just one kind of tree nut, some experts advise steering clear of all nuts if you've got a known allergy to any type of tree nut [source: FAI].

What's more, you may experience an allergic reaction to tree nuts even if you don't ingest them. Merely touching or using a topical product that contains them can be dangerous. Scan the ingredients lists in lotions and shampoos, many of which include tree nuts in their formulas.

Although most fish are known to be allergenic, cod and salmon tend to cause more allergic reactions than other varieties. Rounding out the list of allergenic fish are anchovies, tuna, mackerel and sardines.

If you discover that you're allergic to one type of fish, there's a good chance you're allergic to another type, too [source: FAI]. In any case, try to avoid seafood restaurants in general. Though you might order something off the landlubbers side of the menu, cross-contamination in the cooking process can still trigger an allergic reaction. Furthermore, beware of Worcestershire sauce and Caesar salad dressing, both of which usually contain anchovies. 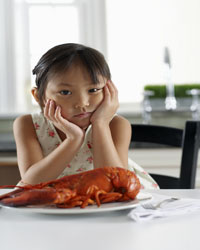 Consider the lobster before you eat it.
Thomas Northcut/Getty Images

Although it's often grouped with finned fish, shellfish comes from a different family. Just because you have an allergy to one family doesn't mean you will to the other. However, doctors recommend being tested for both at the same time anyway. Testing involves a skin prick test or a blood test.

The shellfish family encompasses not only crustaceans like crabs, shrimp and lobster, but also mollusks like oysters, squid and mussels. As with any seafood allergy, reactions might include hives, asthma, atopic dermatitis or anaphylactic shock.

Shellfish allergies usually don't show up until adulthood. Nonetheless, they stand as the most common food allergies among adults [source: Wood].

Manufacturers started using soy as a substitute for milk back in the 1950s because they considered it less allergenic than cow's milk [source: Wood]. Ironically, soy now has the notorious distinction of being a member of the big eight -- right alongside milk.

Soy allergies are more common among young children than adults; luckily, most children outgrow the allergy [source: Maleki]. Unfortunately, for those who are allergic to it, soy is everywhere. Its high protein content makes it a common additive in packaged foods as well as health foods.

Besides causing standard allergic reactions such as hives, asthma and anaphylactic shock, soy can also cause someone to suffer from colitis, canker sores or an acne breakout. 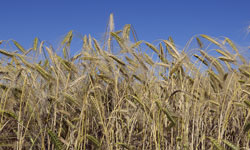 Can you imagine merely breathing the wrong air and suffering an allergic reaction? This is the case for those who have severe allergies to wheat when they inhale wheat flour.

Wheat allergies can develop in childhood (after which the allergy is usually outgrown) or in adulthood. Allergic reactions to wheat include asthma, hives, atopic dermatitis, allergic rhinitis and anaphylactic shock.

People with wheat allergies have a difficult time avoiding it because it's so prevalent in Western diets. Besides being the major ingredient in breads, baked goods and cereals, wheat is also used as a thickening agent for sauces and soups. 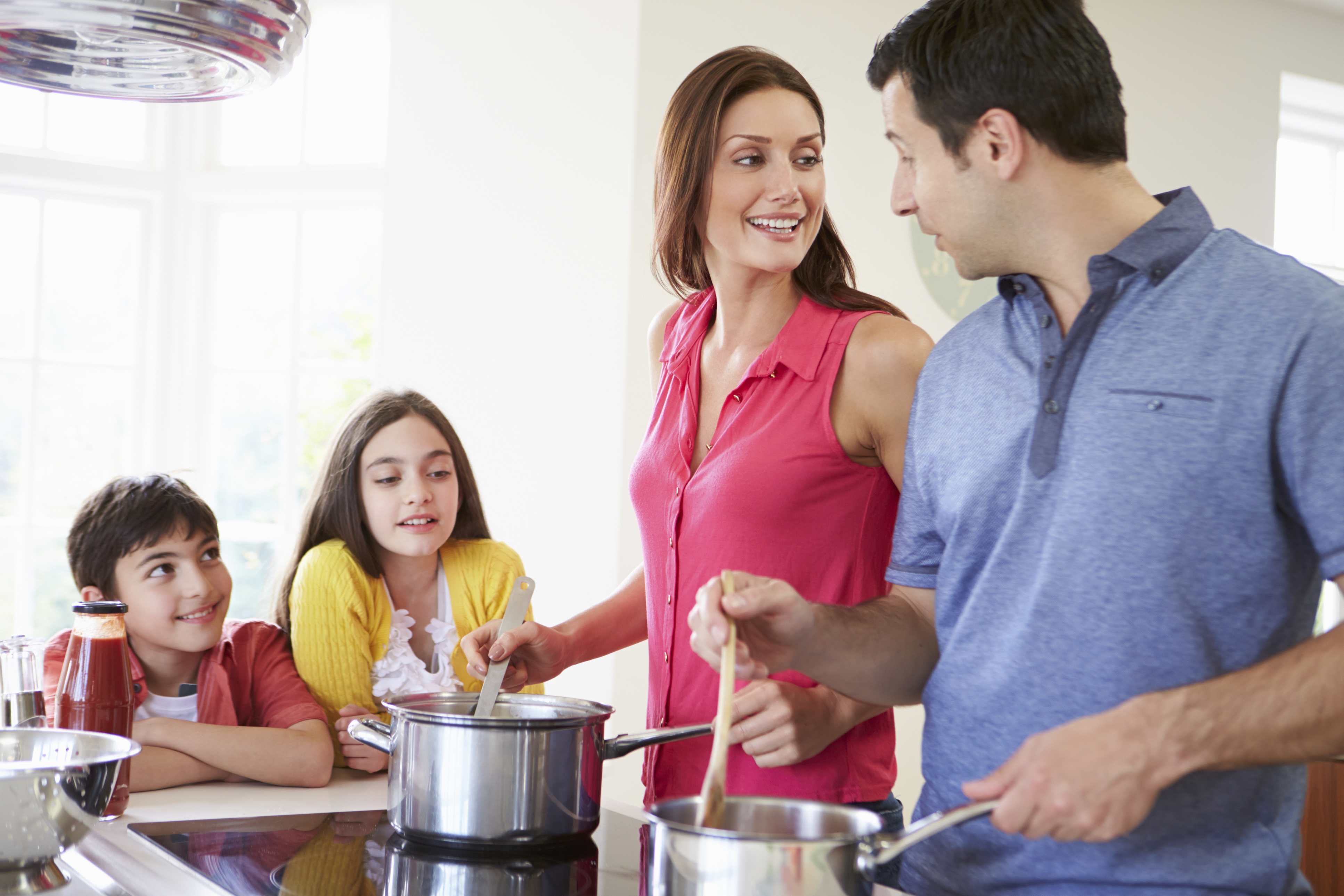