by Charles W. Bryant
Prev NEXT
8 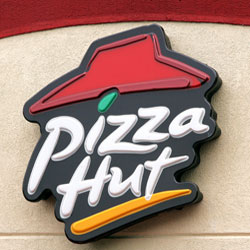 ­Pizza may be Italian in origin, but it has become a truly American food because of how popular it is in the United States. In 2007, the total pizza sales in America nearly hit $37 billion and as of July 2008, there were more than 75,000 pizza stores sliding pies into the oven. Independently operated pizzerias make up a slim majority of these totals. The chain Pizza Hut stands as the largest and most successful franchise with almost 14 percent of the total chain sales at a total of $5.1 billion in 2007 [source: Pmq.com].

­The original Pizza Hut was opened on campus at Wichita State University in 1958, but didn't become a franchise until the following year. The company now operates almost 15,000 units in the United States alone. The chain is known for its all-you-can-eat pizza and salad buffet and for putting some unusual spins on the classic pie -- crusts stuffed with cheese that you're supposed to eat backwards, "The Insider," which is kind of like a pizza sandwich and another concoction called "The P'Zone." Pizza Hut is the number one seller of pizzas in the United States.