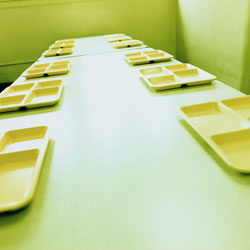 If you're looking for fine cuisine, a school lunch cafeteria might not be the first place that comes to mind. For most of us, school cafeteria food was barely palatable -- even when we were starving after gym class. But over the past few years, outrage over childhood obesity and unhealthy student lunches has prompted many schools to change their ways.

Riding the recent wave of healthy and organic foods, some schools are offering students fancier meals than their parents eat. We'll take a look at some school plans that will make your jaw drop. Try not to drool. 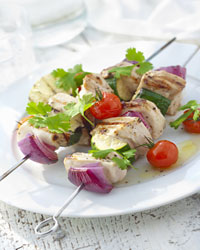 Kids like kabobs. Who would've guessed that?
Robin Macdougall

Although it's situated in one of the poorer boroughs of East London in Shoreditch, Thomas Fairchild Community School serves students a fresh organic vegetable every day [source: DEFRA]. Alasdair Friend, the school's headmaster, was actually pleased in 2002 when the food provider backed out of their contract early. He saw an opportunity to revolutionize the school's meal program. Friend transferred the staff over to direct employment in the school and eliminated profit and management costs.

Meals now include lamb kabobs, roast beef and pesto pasta. Fish fingers are the only menu item made from processed food. Though prices for the meals went up, so did the number of students eating school meals. Whereas 75 percent of students opted for school meals before, that number has increased to 95 percent [source: Lawrence]. Because Friend believes that mealtime helps foster relationships and good behavior, teachers get their meals at a discounted price if they eat in the cafeteria with students.

9: Moms on a Mission at Lethbridge Primary School 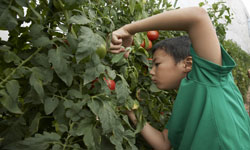 When Lethbridge Primary School in Swindon, Wiltshire, England, was no longer able to afford its food provider and the kitchen was closing, two unlikely characters stepped up to take the reins. Moms Pam Shipperbottom and Laura Illsley both had daughters at the school and wanted to see the students eating better. Despite no experience working in a cafeteria, the women took the job upon themselves.

Their hard work paid off. Now, they serve hot and fresh food at the school, 80 percent of which is organic and most of it from local farms. Despite a dramatic increase in the cost of meals, the number of students opting for school lunches skyrocketed from 40 to 250 in less than two months [source: Dodd]. Kids are expanding their health-food repertoire with such offerings as carrot and chickpea burgers, grains and buckwheat.

After using Lethbridge as their proving ground, Shipperbottom and Illsley started a company called Let's Do Lunch and have repeated their success in other schools. 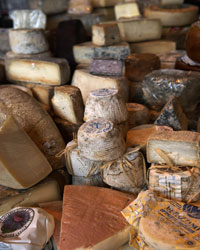 Artisanal cheeses might seem incompatible with snack time, but kids at Hurlford eat it up.
Michael Blann/Getty Images

Many adults would jump at the chance for a taste-testing hosted by an artisan cheesemaker. That's just one of the gourmet opportunities for the students at Hurlford Primary School in Kilmarnock, East Ayrshire, Scotland. Such events help the kids become more receptive toward the fine food that the school kitchen serves up on a daily basis.

Roasted vegetables, stir-fries, jambalaya and couscous are just a few of the common options offered at Hurlford. The school also uses locally grown produce, organic vegetables and free-range eggs. Although it was difficult at first to get the students to try some of the new foods, they gradually warmed up to the cuisine. Soon, the number of students buying lunch at school had risen 10 percent [source: Dodd]. 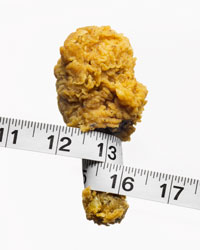 When the nutrition services department of the Portland, Ore., district wanted to test out the possibilities for improving school lunch, they decided to use Abernethy Elementary School as their guinea pig. As a result, students there have been able to enjoy meals made from scratch in the school's kitchen.

Typical meals at Abernethy include baked chicken drumsticks with barbecue sauce, pulled-pork sandwiches and cauliflower bisque. Students also have the opportunity to participate in planting their own fruits and vegetables, watching them grow and incorporating them into their school meals.

Unfortunately, the labor costs for making meals from scratch (rather than merely heating precooked foods) are pretty high. But the kitchen adopted more efficient systems to lower costs, and administrators are optimistic about eventually seeing similar programs in other schools [source: Laufe]. 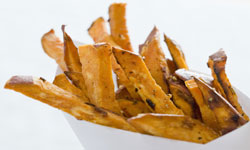 Dedicated to changing "the way America eats," Arthur Agatston, creator of the South Beach Diet, believes improving school lunches is an essential part of his mission [source: Orlando Business Journal]. To this end, the Agatston Research Foundation undertook a study in Florida's Osceola School District. There, they served nutritious food to students in four different schools to see how children would embrace healthful eating habits.

Agatston replaced tater tots with sweet potato fries, white bread with whole-wheat and sugary cereals with Total and Raisin Bran [source: Belkin]. He also made sure the schools served fresh produce. Although students were wary of the healthy fare at first, Agatston saw a gradual increase in participation. Students became even more receptive when schools supplemented the menu with hands-on lessons about farming and nutrition.

5: The Renegade Lunch Lady and the Berkeley Unified School District 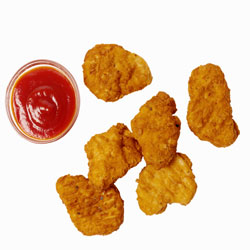 Chicken nuggets made with real chicken are served up by chef Ann Cooper.
Ciaran Griffin/Getty Images

Bankrolled by a generous contribution from the Chez Panisse Foundation, famed school chef Ann Cooper undertook the task of transforming the school menus in California's Berkeley Unified School District in 2005.

With the extra funds, Cooper was able to obtain hormone- and antibiotic-free hamburger meat. She also replaced the reconstituted chicken meat in nuggets with whole chickens. Always opting for the healthier choice, Cooper substituted white breads for whole-grain. While she preferred to use local produce, she always chose the freshest fruits and vegetables available [source: Finz].

Now that the foundation's money has run out, Cooper and the school district will have to struggle to keep the program alive. But after a few years with the program, she's been able to lower the costs of the fancy meals and hopes to inspire other districts around the country to overhaul their menus. 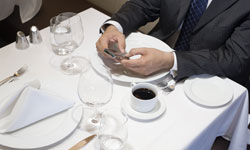 Meals at Millfields Community School in Hackney, East London, England, exude a sense of luxury you'd never expect at a school. Art displays and music set the atmosphere, while tablecloths lend a dash of sophistication. These frills seem fitting, however, given the impressive cuisine the kitchen serves up.

On a typical day at Millfields, you might find the students eating salmon goujons, lamb fajitas, chickpea curry or leek and lentil pie. This is in addition to such sides as carrot sticks and salad or baked tomatoes with basil. The kids also often have such options as fresh fruit and yogurt or peach cobbler for dessert. After two years, the program was so successful, it increased student consumption of school meals by 40 percent [source: Stacey]. 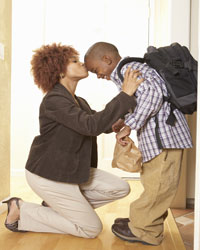 In a bold move, King David Primary School in Childwall, Liverpool, England, has become the first school in the United Kingdom to ban bagged lunches. Administrators at the Jewish school have become so upset at seeing students bring unhealthy lunches from home that they're ready to take a stand. (Parents who opt out of the meal plan at King David are welcome to bring their child home for the lunch break.)

Meals from the winter 2009 term included such choices as beef Bolognese and veggie stew with couscous. Now, plans are in motion for the school to merge with the nearby King David High School in new facilities that will include one of the largest kosher kitchens in the country. Administrators are excited at the prospect of offering sushi to their students. Not too shabby for a kitchen that will serve more than 1,200 meals a day [source: Daily Mail Reporter].

2: Fresh from the Farm at Landscove Church of England Primary School 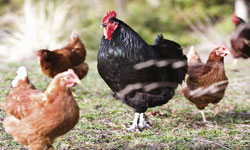 Perhaps what's most impressive about Landscove Church of England Primary School in Ashburton, Devon, England, is that it's able to serve up an impressive and healthy lunch plan despite not having a kitchen of its own. Landscove Primary's headmaster, Robin Smith, was settling back in the job after recovering from a brain hemorrhage when it struck him how terrible the school's food was. Seeking to drop the food provider, he learned that a student's parent ran a nearby farm with a kitchen that cooked for its workers.

Smith struck a deal with the farm. The kitchen would cook for the school using its own farm-fresh produce and meat from a local butcher. Not only do the kids get to visit the farm and learn about the process of growing and cooking food, they also eat very well. Ninety percent of the produce in the school's meals is organic, and about 60 percent of the meat is local and free-range [source: BBC News]. 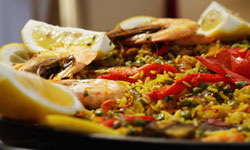 Seafood paella is on the menu at Icknield High.
Maria Teijeira

You'd think a chef who was trained at the Savoy Hotel in London might find it degrading to work in a school kitchen. But despite his lofty background, David Lucas takes pride in his work at Icknield High School in Luton, Bedfordshire, England. He was able to carry over his education to revolutionize the school's kitchen and convince the staff to try new methods of preparing meals.

Lucas' efforts have reached great success. He's able to keep costs within budget and still serve meals like seafood paella and boeuf bourguignon. Always alert to good deals, he uses local produce and will occasionally obtain pheasant when it's cheap enough. Lucas even caters to the multicultural student body. All in all, he's doubled the number of students and staff who purchase food from the kitchen [source: DEFRA]. 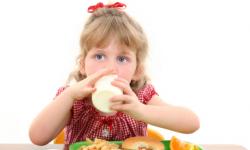 5 Italian Dishes Kids Can Make
What foods are good for a child's brain?
Simple Ways Kids Can Cook