by Meghan E. Smith
Prev NEXT
4 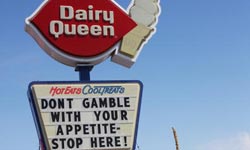 Should you gamble on an unlisted item still being available at Dairy Queen?
Nina Raingold/Getty Images News/Getty Images

Internet rumors abound as to whether a secret menu even exists for Dairy Queen, one of America's classic stops for sweet treats. Some people claiming to be in-the-know insist that there's a big notebook in each DQ that contains recipes and prices for long-ago menu items. Some of the old-timey favorites include the Lavender Blue Sundae (a blueberry marshmallow concoction), the Jack and Jill Sundae (marshmallow and hot fudge) and the Chocolate Chip Blizzard, which uses the chocolate hard shell coating instead of chocolate chips. Other items supposedly on the secret DQ menu include the Banana Split Blizzard and Peanut Buster Parfait, but a check of the Dairy Queen Web site reveals they're still official menu items. Even so, it's possible that not all DQ locations will list the items, so you may have to ask.