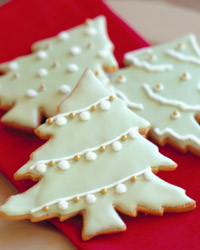 Although festive decorations and piles of presents are certainly enough to keep the holiday season interesting, most of us will readily admit that the constant stream of food is a definite highlight. Giant hams and stockings stuffed with candy are delicious, but the baked goods (especially the desserts) are probably the most drool-worthy.

While we might conjure up images of sugar cookies when we think of holiday baked goods, virtually every culture around the world has its own set of seasonal sweets. On this list of international holiday baked goods, some treats may be very familiar; others might just become your new favorites. Our culinary journey begins in ancient Rome.

Love it or hate it, there's no doubt that fruitcake has left an indelible mark on the holiday dessert scene. This holiday treat, which has been around for centuries, is crammed full of dried or candied fruit, nuts, and rum or brandy. These ingredients, combined with flour, eggs and sugar, make fruitcake an extremely dense dessert -- a six-serving loaf weighs in around 2 pounds (0.9 kilograms). Many fruitcake critics cite the overwhelming heaviness as the dessert's main turnoff. Others appreciate the myriad of flavors resulting from the combination of spices, fruits and liquor. Hardcore fruitcake aficionados recommend preparing the dessert a few months in advance of your holiday dinner to allow the flavors time to properly emerge [source: O'Shea].

Historians believe that fruitcake originated in ancient Rome, although the recipe was a little different back then: a barley mash mixed with pomegranate seeds, raisins and pine nuts. During the Middle Ages, cooks experimented by adding preserved fruits, spices and honey to the cake. By the 18th century, the recipe had grown so decadent that it was temporarily outlawed in Europe because it was thought to be sinfully rich. Eventually, the law was overturned, and fruitcake became a popular teatime snack in England [source: Stradley]. 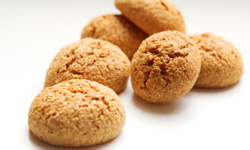 Cookies first burst onto the culinary scene around the seventh century, when bakers used small portions of cake batter to test the heat of the oven. The resulting treats were dubbed koekje, which is Dutch for "little cake."

Although many varieties of holiday cookies are rolled and cut into shapes like Christmas trees, stars and stockings, then decorated with seasonal colors, the majority of Christmas cookies don't even have to look the part. In Italy, for example, almond cookies known as amaretti are a traditional holiday favorite made of sugar, almonds and egg whites [source: Seamans]. Krumkake, a thin, waferlike cookie, is one of Norway's beloved holiday cookies, whereas a cookie called papparkakor, which is similar to a gingersnap, reigns in Sweden. Kourambiedes, a Greek favorite, get extra flavor from ingredients such as cloves and brandy.

Whether you prefer dropped, rolled or bar cookies, be sure to heed the advice of experts before breaking out the apron. First, chilled dough is easier to roll out or slice, so it's a good idea to pop it in the refrigerator for a half hour or so beforehand. Also, proper storage helps cookies retain their freshness. Once the cookies are fully cooled, transfer them to a sealed container, and separate layers with wax paper to prevent them from sticking [source: Epicurious]. 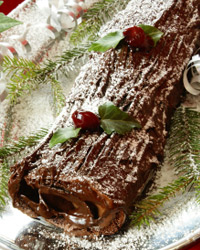 A Yule log-shaped cake brings the flavors of France to your dinner table. Add your own marzipan mushrooms for extra whimsy.
©iStockphoto.com/hipokrat

French cuisine is widely regarded as one of the best in the world, and the traditional Christmas dessert Bûche de Noël lives up to the hype. This Yule log-shaped cake isn't just friendly to the taste buds -- the many extravagant, edible decorations it's topped with make it visually pleasing as well.

Rumor has it that the dessert was created during the time of Napoleon I, when the ruler ordered chimneys kept closed to prevent cold from seeping into homes and causing illness. Christmas revelers, who traditionally gathered around a warm hearth to celebrate the season, opted instead to congregate around a tasty Yule log-shaped cake, which evolved into the beautifully decorated Bûche de Noël that so many people enjoy today [source: Andronico's].

Many experts emphasize that the dessert, which is a log-shaped roulade sponge cake filled with pastry cream and topped with buttercream frosting, doesn't have to be intricately decorated to be an authentic rendition of the classic. Adventurous bakers who wish to try their hand at edible art traditionally adorn the cake with meringue or marzipan mushrooms, moss made of spun sugar and other sweet decorations fashioned to convey a woodland scene. Less experienced chefs might want to start with this Bûche de Noël recipe. Those who enjoy this picturesque and delicious dessert appreciate its visual appeal so much that they almost feel badly about eating it -- almost. 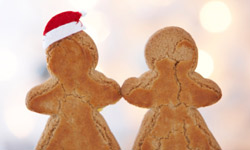 One bite of gingerbread will transport you to the Middle Ages, when spices were worth their weight in gold.
Noel Hendrickson/Getty Images

Back in the Middle Ages, creative cooks brightened their kitchens with a culinary creation eventually dubbed "gingerbread." They fashioned the dough into shapes with carved boards, but chefs today use cookie cutters in all shapes and sizes when baking this festive holiday treat. The perfect combination of sweet and spicy, gingerbread is made with molasses, nutmeg, cinnamon and ginger.

Gingerbread can also be made into festive miniature houses in celebration of the holiday season. In fact, the art form is so popular that gingerbread house contests are held all over the world. After all, who wouldn't like to compete in a contest where the necessary materials are a collection of the best-available gingerbread, icing, gumdrops and other candies? Try this gingerbread recipe for a dessert that even Hansel and Gretel couldn't resist.

The most successful gingerbread chef follows a few standard rules. First, before rolling out the dough, be sure to chill it in the refrigerator. Also, apply a little bit of flour to your work surface, rolling pin and cookie cutters to prevent the dough from sticking. Be sure to cool the cookies completely before decorating, after which you should give them about two hours for the decorations to set properly [source: Carter].

As if eight days of presents and celebration weren't enough, Hanukkah festivities traditionally include some pretty mouthwatering fare. Sufganiyot, more commonly known as fresh jelly doughnuts, are a sweet staple during the holiday, which is also known as the Festival of Lights. The holiday celebrates the Jewish people's freedom from religious persecution, as well as the biblical miracle in which sacred oil burned in a lamp for not just one night, as it should have, but eight full nights. In recognition of this extraordinary event, many Hanukkah foods, including sufganiyot, are fried in oil.

The popular dessert, which can be bought virtually anywhere in Israel, was likely introduced by Austrian-Jewish immigrants in the mid-1900s. Although recipes for this delicacy may sound daunting, many chefs promise that sufganiyot is surprisingly easy to turn out. In short, when the dough has been prepared and has risen twice (once after kneading and a second time after the doughnuts have been shaped), the doughnuts are dropped in hot oil to fry. After they're removed from the fryer, the doughnuts are dusted with cinnamon or powdered sugar and filled with jelly, caramel or chocolate. Experts attest that the end result is well worth the effort in freshness and taste. Even though the caloric price tag is a little steep, people of all faiths will enjoy indulging with this melt-in-your-mouth treat. 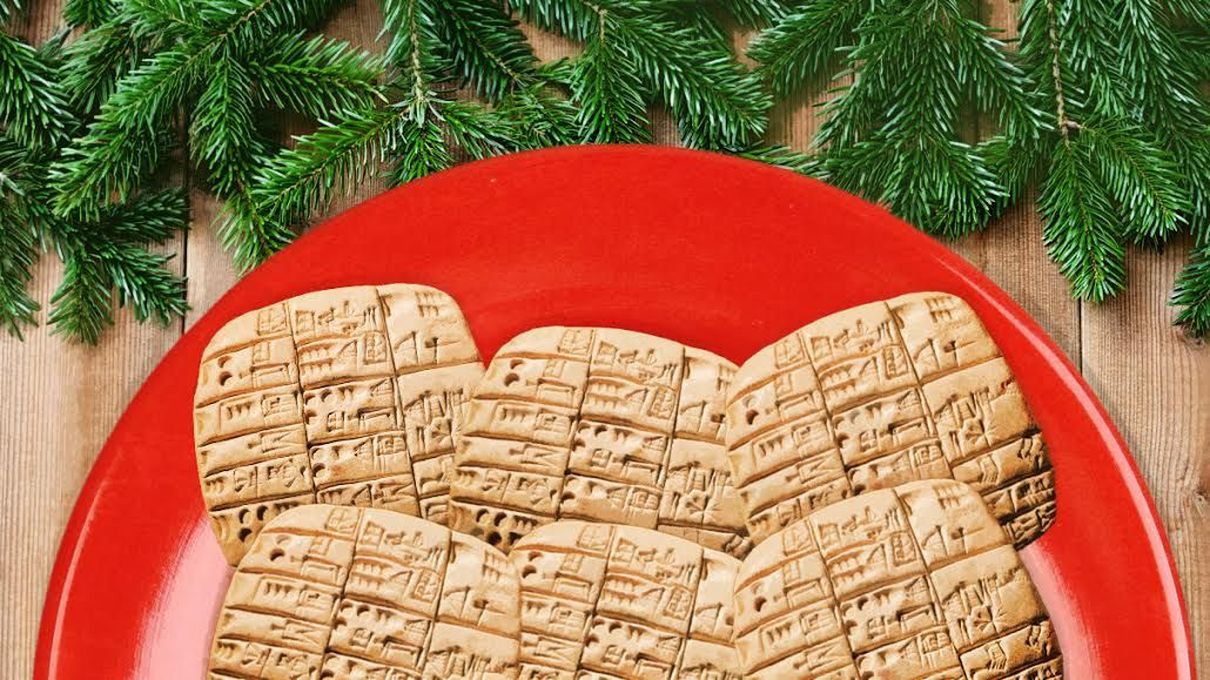