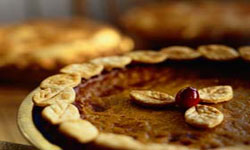 Every year when the leaves change color and temperatures fall, taste buds invariably start to crave fall-specific foods and flavors. Although summertime boasts a variety of delicious foods (ice cream, anyone?), cooler weather is the perfect time to enjoy piping-hot dishes and seasonal items not as readily available during other times of the year. With the holidays quickly approaching, many menus change to include dishes fit for special occasions or tailgate parties. As the mercury continues to dip, hearty stews, soups and hot beverages help warm up cold noses. We've put together a list of our favorite fall foods. Grab a snack before proceeding, though. Just reading about some of them will no doubt set stomachs rumbling and mouths watering. 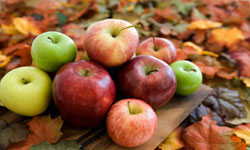 Probably the most popular and plentiful fall fruits are apples, which can be munched on raw, candied and baked into pies. In addition to their full flavor, apples are packed with potassium, calcium, vitamin C, folic acid and fiber. Another fixture in the produce aisle is the pumpkin -- and it's not just for carving. Pumpkins contain carotenoids, which help prevent cancer and heart disease. Other fruits that peak in the fall are pears and grapes.

Root vegetables, such as carrots, parsnips, beets, rutabagas and turnips, also abound this time of year. They add a hearty flavor to stews or roasted meats. Greens like cabbage, collards, brussels sprouts and spinach are rich in vitamins and nutrients and readily available during cooler months. Winter squash and broccoli are other delicious, fiber-rich options for vegetable enthusiasts to roast or tuck into creamy casseroles for a healthful boost. 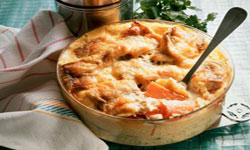 You can bake fall vegetables into your family's favorite casserole.
Eising/Getty Images

Most of us have a signature dish bound to produce satisfied murmurs at special occasions during the fall months. From sweet potato soufflé to homemade macaroni and cheese, these decadent comfort food dishes are often the pièce de résistance at gatherings with family and friends. Mashed potatoes -- whether served lumpy, creamy or cheesy -- are another necessary staple for entertaining at this time of year. Even fruits have their place in the comfort food genre.

However, when they're baked into pies and cobblers, apples, pumpkins and other seasonal fruits lose some of their nutritional merits. Experts caution against going overboard on these dishes, which are laden with butter, sugar and cream. Instead of abstaining completely, keep your portion sizes in check or cut down the caloric content of these foods. Opt against pouring calorie-dense gravy over mashed potatoes and stuffing, make macaroni and cheese with low-fat milk and cheese, and reduce the amount of sugar in dessert recipes [source: WebMD]. 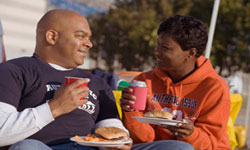 When you think of tailgates, you can practically smell the hamburgers sizzling on the grill and feel the fall chill in the air.
DreamPictures/Getty Images

Collegiate and pro-sports fans look forward to fall with the sort of fervor usually reserved for momentous life events. For sports enthusiasts, the end of summer marks the beginning of football season, which goes hand in hand with the time-honored tradition of tailgating. In fact, nearly 70 million Americans will be a part of a tailgate party this fall [source: Food Channel]. During the pre-game hours of tailgating, parking lots at college and professional football stadiums fill up with eager game-goers and their grills, side dishes and coolers. Some stick with faithful tailgating fare, such as hamburgers and beer, while others host more elaborate spreads, like low-country boils and mixed drinks. Whatever your preference, the key to successful tailgating is following the three P's: plan, prepare and party. 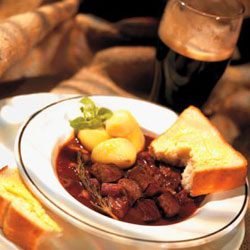 Stay in on a chilly fall evening, and cozy up to a hearty stew and dark beer.
Stockbyte/Getty Images

Most people prefer to reserve sweating for high-impact cardio, which is why soups and stews aren't often served during the stifling summer months. Once the temperature starts to dip, however, these steamy favorites begin to surface on dinner tables everywhere. Stews and soups, which usually feature meat, veggies and other hearty ingredients, are the perfect all-in-one meal. Chicken and dumplings, beef stew and vegetable soup are just a few options. Experts recommend a little bit of healthy judgment when partaking in these liquid meals, as calorie and fat counts can easily spiral out of control. Cream-based stews pack many more calories than broth- or vegetable-based stews. Also beware of adding excessive amounts of cheese, cream, rice and noodles, and serve your cup or bowl with a modest slice of bread [source: WebMD].

Short of a space heater, nothing warms you up quite like a hot beverage. Hot chocolate topped with marshmallows or whipped cream is a wonderful addition to breakfast or enjoyed as an evening "mocktail." Apple cider is a favorite for fall hayrides, campfires and other outdoor events. Mulled wine is another popular (albeit age-restrictive) hot beverage that's easy to prepare in a slow cooker or on the stove. All you need is water, sugar, red wine and a few mulling spices. If you want to add a little fall flavor to your regular cup of tea of coffee, sprinkle on some nutmeg and cinnamon.

Although Halloween candy and rich fall foods are tempting, it's a wise idea to think before indulging. A paltry 100 extra calories per day can quickly result in a 10 pound weight gain over the course of a year [source: WebMD]. Instead, a sweet tooth can be satisfied with naturally sweet fruits that peak during the crisp fall months, such as apples, pears and grapes.

You can tuck fall vegetables into your family's favorite casserole.
Eising/Getty Images

If church fellowship hall gatherings and potluck dinners were part of your youth, you probably also remember your oven-mitted mother removing a piping-hot casserole dish from the oven to bring to the affair. Though many cooks think of recipes as coveted heirlooms passed down through the maternal line, when it comes to casseroles, Grandma was probably making it up as she went along. Maybe green beans were in season, or maybe she had some leftover ham she needed to use up; whatever the inspiration, casseroles are a relatively modern invention.

Today, we think of casseroles as potato-chip crusted throwbacks to the 1950's. Still, most home cooks have several casserole recipes up their sleeves -- from standbys like macaroni, green bean and tuna to special occasion dishes like the cassoulet recipe from "Julia's Menus for Special Occasions."

Hearty, cost-effective and tasty, casseroles are as easy to tote to a tailgate party today as they were when your Mom was cooking them. And speaking of tailgate parties, our next terrific fall food, barbecue, is coming up next.

When you think of tailgates, you can practically smell the hamburgers sizzling on the grill and feel the fall chill in the air.
DreamPictures/Getty Images

The smell of wood smoke in the air and frost on the ground means only one thing to certain sports fans: fall football. Football season begets tailgate parties, and tailgate parties beget barbecue. Unlike some of our other foods, fall can not claim a monopoly on barbecue. After all, summer and the fourth of July are practically synonymous with this style of cooking. Nevertheless, no football tailgate would be complete without smoked meat -- and that makes barbecue a terrific food for fall as well.

No one really knows the origin of barbecue; it seems to have come from everywhere all at once. Even today, barbecue varieties are synonymous with their region of origin. Memphis pork-shoulder barbecue is sweet and tomato-y. North Carolina likes a vinegary sauce and uses cuts from the whole hog. Kansas City is famous for its dry rubbed ribs while Texas corners the market on mesquite-fired brisket.

And now that you've got your smoker fired up, you might want to consider putting a bird or two on along with your beef and pork. We talk turkey next. 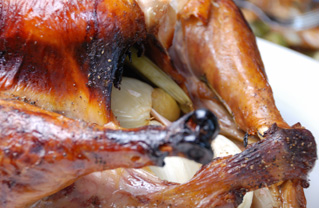 When we think of fall, we think of holidays; and when we think of holidays and food, turkey is what we most often picture ourselves gobbling up. Though George Washington proclaimed November 26 an official holiday of "sincere and humble thanks" in 1789, it was celebrated only regionally in New England until Abraham Lincoln declared it a national holiday in 1863. Back then, venison was probably more of a menu-mainstay than turkey, but by the time Franklin D. Roosevelt moved Thanksgiving to the third Thursday in November (1939), turkey ruled the table [source: National Archives]

Whether you like to roast your turkey, deep fry it or buy it already cooked and sliced, as soon as the seasons change, turkey -- from Butterball to heirloom -- will be everywhere. In fact, turkey and fall go together almost as well as pumpkin and pie, which brings us full circle in this top 10 list. Our number one terrific fall food, pie, is up next. 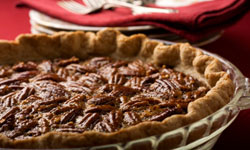 Pecan pie often shows up at Thanksgiving and Christmas.
iStockphoto/Thinkstock

Sweet or savory, pie has a history that dates back to medieval times. Historians believe that the pie shell (arguably, the best part of the dish) dates back to the Greeks, who were believed to be the first to make pastry by mixing flour and water. The first pies were more savory than sweet. Cooks in medieval England filled pastry shells with meat and fruits like currants and dates. The first pumpkin pie recipe appears in cookbook dating back to 1675, but this and other sweet pies didn't begin to appear in American cookbooks until the 17th century [source: Mayer].

While some might argue that pie is a dish for all seasons, certain pies show up more often than others on fall tables. Pumpkin pie may be the all-time fall pie, but others like maple-almond, pecan, peanut butter brownie, caramel apple, cranberry cherry and sweet potato are also cool-weather favorites.