Should you really avoid ordering fish on Mondays?

Knowing When and How to Order Fish 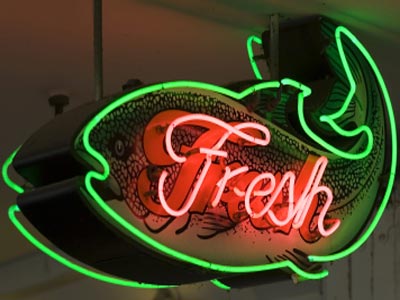 It turns out that Bourdain makes a good point about proceeding with caution if you have a yen for fish on Monday. If you're dining near the coast or at a restaurant known for outstanding seafood, you probably don't need to pay attention to the calendar. But if, let's say, you're in Kansas City or Reno, saltwater fish must be shipped to the restaurant. Most fresh fish wholesalers can ship fish overnight, but that usually isn't going to happen on a Sunday.

One telling sign that a bistro might be trying to get rid of old fish is found on the specials board. On Sundays and Mondays in particular, if you notice a promoted fish dish drowning in a heavy sauce, steer clear. The sauce may be a flavorful mask for the stronger fishy taste that seafood acquires as it ages. And when in doubt, don't be afraid to ask. The server should be able to tell you where the fish came from and how fresh it is, especially at higher-rated restaurants.

With fish as the primary protein on sushi restaurants' menus, does that mean the spicy tuna rolls that light up dreary Mondays are stuffed with old fish? Some sushi eateries aren't open then for that very reason. Overall, a slightly different set of health rules apply when it comes to serving raw fish. The Food and Drug Administration (FDA) requires that sashimi and other seafood intended for raw consumption must be frozen first to kill bacteria. Freezing may also be a routine step in the seafood shipping process that can preserve it for up to two years [source: Moskin]. Even in sushi's homeland, Japan, previously frozen seafood is routinely tucked into rice and nori rolls [source: Moskin].

If sushi isn't your cup of tea, and you still want fish on a Monday, you can always cook it yourself. Many retail fish markets get in fresh shipments every day that you can select from. When shopping for fish, it's important to follow your nose. The older the fish, the more pungent it becomes. A fresh fillet shouldn't smell particularly fishy; instead, you ought to detect a cucumber-like scent [source: Brown]. Also inspect the condition of the flesh. Go for fillets that appear brighter and slime free [source: Food and Drug Administration].

Or if you have an itch to travel, hit up Tokyo's Tsujiki Fish Market. Be sure to get plenty of sleep -- the tuna auction starts around 2 a.m.