Everything You Ever Wanted to Know About Cafeterias 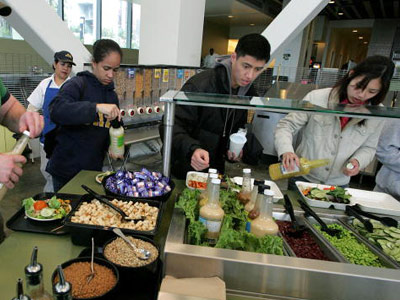 This cafeteria at the University of California at Berkeley is 100 percent organic -- a far cry from the first cafeterias. See more school lunch pictures.
Justin Sullivan/Getty Images

The next time you eat out, take a moment to contemplate the menu. How much of your choice of entree is based on that mouthwatering food photo? Well, if you grew up before the advertising age when menus were crudely printed sheets of paper or entries on a chalkboard, you might have spent a little more time wondering if what you were ordering was really what you wanted.

Although dining out before the advent of huge restaurant chains with standardized fare was sometimes a surprising and disappointing experience, one type of restaurant was always reliable. Cafeterias took the guesswork out of ordering. You could see your food before you bought it, and better yet, because there was minimal service, you didn't even have to leave a tip. Good, ready-made grub and a bargain, too.

A New Kind of Smorgasbord

The origin of the cafeteria is hotly disputed in some quarters, but there is evidence to suggest that we have John Kruger to thank for the Americanization of the Swedish smorgasbord style of dining. His 1893 self-serve coffee shop was a hit at the World's Columbian Exposition, and he even chose the word "cafeteria" to distinguish his fast food and easy service setup. From the Spanish word for coffee shop, the cafeteria concept caught on fast.

By 1898, refinements started to appear that would standardize cafeterias across the country, such as organizational strategies for serving lines, food layout, cash register placement and the addition of handy serving trays to carry food items [source: Cuisinenet].

In addition to being able to inspect your food before you ordered it, you could get your food fast -- well, by turn-of-the-century standards. Most items were already prepared, and any last minute touches were added when the food was plated.

Large communities and institutional settings benefitted the most. Where large groups of people were around at lunchtime, cafeterias were a boon. They flourished in office buildings, government buildings, airports, shopping centers, schools and hospitals. Today, we can still see cafeterias used in some of these applications. In their heyday, they weren't considered ho-hum choices, either. Many cafeterias were sparkling confections designed with Hollywood in mind, recreating exotic locales, like forests or tropical getaways that often served as meeting centers for multigenerational family gatherings or large business venues.

The Depression and Beyond

After the stock market crash in 1929, the focus on eating out shifted from glitz to good, old-fashioned value. If people could afford to eat away from home, they wanted to find a bargain. Here again, cafeteria dining was well-suited to a no-frills approach. Labor costs were low, and because food was prepared in large batches, owners could take advantage of volume discounts on ingredients while passing the savings on to customers. Self-service dining allowed people to forego tipping, and some establishments had an all-you-can-eat policy, making them a good deal if you were eating on a budget.

Cafeteria style dining thrived until communities started to spread out following the World War II. As people began moving away from congested cities to raise their children in the suburbs, cafeterias started having problems keeping enough customers to survive. Just as bad, the newest restaurant craze, the drive-in, was taking business away, too. People were eating in their cars and then using them to get out of town.

We owe a lot to the cafeteria. The promise of no waiting, consistent menu options and good value may have been unique to the time, but today, it's an expected part of eating on the go. As a matter of fact, the next time you head for the drive-through, spare a moment to say a silent thank you to the cafeteria. Without its valuable traditions of efficiency, consistency and thrift, the fast food meal you're ordering might cost more, take longer to prepare and not be what you're expecting.

In 1902, enterprising restaurateurs transformed the cafeteria into a fully automated eatery with the introduction of the automat, food delivered by machine.