Everything You Ever Needed to Know About Food Commissaries 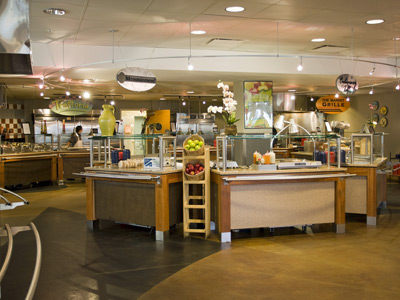 Commissaries may resemble cafeterias, but there are some differences.
Wesley Hitt/Getty Images

Military commissaries provide one-stop shopping for active duty and retired military personnel and their families at reduced rates, compared to what you would usually pay at a commercial grocery store. Commissaries are required by law to sell their products at cost plus a 5 percent markup. The markup isn't a profit -- it covers operating expenses. The additional expenses of commissary operations are subsidized by taxpayer dollars. These huge savings are passed onto military families as a perk of being part of the U.S. armed forces, a benefit that's heavily heralded during recruitment. It's estimated that families can save around 30 percent off their grocery bill shopping at a commissary [source: Toombs]. They're typically located on or near military bases, so they can serve families that are stationed in remote locations far away from the nearest town. Military personnel are allowed to shop at any commissary in the world. There's also a virtual commissary for online shoppers that offers grocery items at commissary prices, and includes a section with pre-made gift baskets and care packages for loved ones who have been deployed.

Movie studio commissaries date back to the days of silent films, and they originated as places to quickly and cheaply feed studio employees. In those days, employees included famous actors and actresses, who were under contract with the studios, and commissaries quickly became the hub of studio lots as the place to "see and be seen." Big stars frequented the commissary and aspiring starlets would pay visits in an effort to be noticed by studio executives. Many a diner at the commissary hoped for the opportunity to be discovered, and many deals were made and continue to be made over a meal within the commissary walls. Beginning in the 1960s, when stars and writers stepped off the studio lots as free agents and studio heads retreated to private dining rooms, commissaries became less of a gathering place for the rich and famous, and more of a cafeteria. Modern day studio commissaries have lost a lot of their glamour and allure, and are now better known for dated décor and bland meals. But some studios are heeding the complaints and stepping up the meal options with fresh fare prepared by lauded chefs. Most of the big studios, like Fox, Warner Bros. and Paramount still have commissaries that offer on-site meal options for employees. Studio commissaries are typically not open to the public, but some studio tours offer a quick stop for lunch and a little look around.

Did you know? It's rumored that Fred Astaire first met dancing partner Ginger Rogers in the MGM commissary.