Kick Off Cook Off Recipes 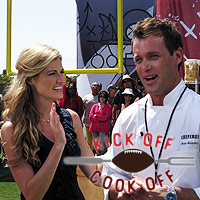 Try these great recipes from the football fans and players on TLC's Kick Off Cook Off.
TLC

Tune in to TLC's six-part series KICK OFF COOK OFF, a new cooking competition that slams together America's two favorite pastimes: football and cooking! Two teams of football-loving foodies compete, hoping to score with their tried-and-true, tailgate-style recipes. But they are also competing against their favorite football players, who are in it to prove that they are as talented in the kitchen as they are on the field.

Bill and Pat's Black and White Ribs with Potato Casserole

Colin and Jacob's Beer Can Chicken

Gloria and Penny's Lamb with Couscous and Roasted Figs

Kurt Warner and Brenda Warner's Pappardelle with Peppers and Sausage

Who decides what goes into school lunches?
Should you really avoid ordering fish on Mondays?
Thanksgiving Dinner on a Budget 101