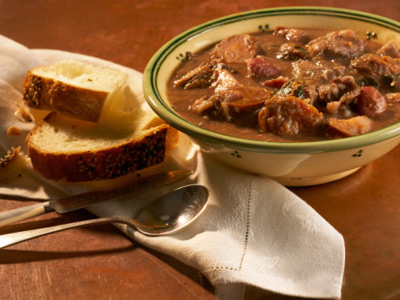 Stew has been around for a long time. It was featured in the Roman cookbook "Apicius" that may date from the first century B.C., and it's also mentioned in the Hebrew Bible. In all likelihood, its real origins are concealed somewhere in prehistory, when men were swinging clubs and making stew in animal stomachs or modified turtle shells. Actually, the concept is pretty simple. Mix together a few ingredients, including a tough piece of meat that has a lot of connective tissue, and let it all cook under low heat for hours with some liquid and whatever spices you have lying around [source: Food Reference]. What could be easier?

Over the centuries, recipes have come and gone, but stew, in one form or another, is an enduring favorite. One reason for its continued presence on the menu is its practicality.

Stew makes the best use of difficult ingredients, including tough cuts of meat, fibrous root vegetables, and tasteless grains and legumes. With the addition of water, vegetable juices, wine, or even hard liquor, stew creates a thick broth that will disguise the flavor of meat that's starting to go bad. The sauce can also alter the taste of other ingredients, making them seem meatier and more satisfying. As the connective tissues in stew meat start to break down, they release a gelatin that thickens and enriches the sauce, producing a silkier and more substantial mouth feel. These textural differences, and the larger size of the cut meats and vegetables, are a couple of the things that distinguish stew from soup.

Stews can feed more with less, too. All that juice stretches portions and reduces food costs. For poor people throughout history, being able to eek out another meal from any available ingredients may have meant the difference between eating and going hungry.

Today, stew is still a practical choice. It's easy and inexpensive to make and feeds a crowd. It also stores well, travels well and works beautifully as either a lunch or dinner option.

Make a Stew Yourself and See

To make a flavorful, traditional stew, you need meat (fish and poultry work, too), low heat and time. The more mature the meat, the better. As animals age, their muscle tissue becomes tougher, but more flavorful. Stewing chickens and chewy cuts of beef, like chuck, are poor grilling choices but will produce succulent stews. What about the other ingredients? Well, meat does traditionally share space in stew with potatoes, mushrooms, tomatoes, squash or other seasonal edibles, but the sauce is the thing that pulls it all together, and that usually means adding some type of meat as a base.

Although you can use an iron pot in the oven or a nonstick pot on the stovetop, a slow cooker takes the guesswork out of making stew. It isn't uncommon to cook a stew on low heat for eight hours or more, and often overnight. Programmable slow cookers will automatically step down the heat after a preset cooking time has elapsed. Start with a simple recipe and add your own embellishments. Stew is a dish that shines when you incorporate regional produce and other ingredients, so let yourself go.

When folks start to feel a chill in the air every fall, stew begins popping up on restaurant menus and on grocery store shelves. It's an inexpensive winter favorite that's never out of fashion.