Tales of the Turkey: Catastrophes, Jokes and More

by Jessika Toothman
NEXT PAGE 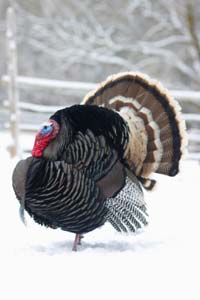 Turkeys are native to northern Mexico and the eastern United States, so Europeans didn't get their first taste until the 16th century. The wild turkeys they would have dined on could run up to about 20 miles per hour (32 kilometers per hour) and fly short distances at speeds of up to 55 miles per hour (88.5 kilometers per hour) [source: University of Illinois Extension]. Nowadays, most of the turkeys people consume are not so athletic. They've been bred to appeal to customers, and customers tend to care more about things like the appearance and quality of the meat than the look of the live bird.

Minnesotans are top dogs when it comes to turkey production: They raised an estimated 48 million pounds (22 million kilograms) of turkey in 2008. North Carolina and Arkansas are also big in the business [source: The National Turkey Federation]. But Americans aren't alone in their love for turkey; Israelites ate an average of about 23 pounds (10.5 kilograms) a person in 2008. In contrast, that same year a typical American ate about 17.6 pounds of turkey, a French person put away about 11.7 pounds and a Canadian just shy of 10 pounds (or 8, 5.3 and 4.5 kilograms per person, respectively) [source: Turkey Farmers of Canada].

Turkeys rank fourth when it comes to protein placed on the plates of Americans -- with chicken, beef and pork beating them out. That doesn't mean turkeys have it easy. Americans eat an estimated 675 million pounds (306 million kilograms) of turkey each Thanksgiving, and with each bird weighing in at an average of 15 pounds (7 kilograms), that comes out to be about 45 million gobblers who get the ax [source: University of Illinois Extension].

Plenty of bad jokes are floating around out there that poke fun at turkeys. But these fowl that Ben Franklin championed so ardently as the national bird can handle some jibes. Here are a few silly examples that are sure to leave you groaning:

Corny? Definitely. But still capable of cracking up many 6-year-olds. For more information about turkey catastrophes and some tips on avoiding them, continue to the next page. 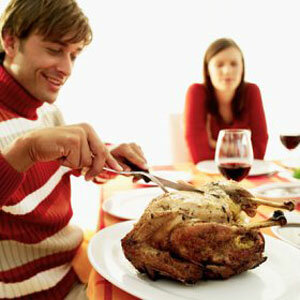