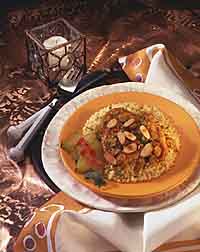 Tagine is a traditional Moroccan stew typically made with chicken or lamb, vegetables and spices that is served over couscous. This tagine features pork tenderloin, which is naturally very lean and flavorful.