In New Zealand, crop shortages are driving a spate of avocado thefts. Local farmers have reported about 40 incidents so far this year, with up to 350 avocados stolen each time.

Industry experts suspect that the illegitimate fruit is being sold locally, at roadside stalls and to grocers and restaurants, at slightly less than the market price – which has been ranging from $4 to $7 ($3 to $5 American) per fruit.

Australia's been hit, too. Check out this sign from a Brisbane grocery store:

The thefts seem to be more opportunistic than organized, but there are precedents for black market avocado activity. Really. In California in the late 1980s, three winters of freezes cut crops short for long enough that petty thievery gave way to professional-level heists. Organized crime rings stole $10 million dollars' worth of fruit in a single year— about 5 to 10 percent of the California industry then.

Naturally the state hired full-time avocado cops, who in their first year of operations uncovered 283,000 pounds (128,367 kilograms) of illicit fruit being sold on the black market.

On an even larger scale, avocado farmers in Mexico's Michoacán region reported widespread extortion from the drug cartel Los Caballeros Templarios (The Knights Templar) in 2013. The value of the fruit makes it a lucrative racket. In the area, avocados yield higher profits than any other crop, including marijuana – earning avocados the nickname oro verde (green gold).

So far, the thefts in New Zealand have amounted to only a few thousand avocados out of the 25 million that may be sold this season, and new crops should stabilize the market over the next few weeks. Check out the video above to learn more.

Why Men Don't Like to Go to the Doctor 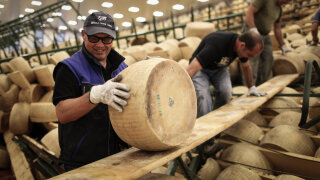 How the Food Industry Made 'Artisan' Meaningless

Not Your Average Fruit: The Avocado Quiz