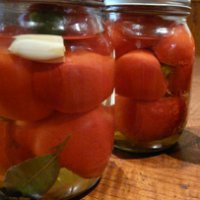 When I went to pick up my bushel of sweet red peppers from my local vendor last week, I was fascinated by the huge variety of different peppers they had for sale. I really wanted some hot banana peppers to pickle, but I came across these beautiful fire-engine red hot cherry tomatoes, and I just had to buy them. The guy who sold them to me said "You know these are hot right? People buy them all the time thinking they are sweet and come back to complain they burned their mouths". Yup, I knew they were hot and I bought them with my son in mind.

My son loves hot peppers and seems to have an endless tolerance for extremely hot food. Stuff that would leave my eyes watering and my tongue burning is kid stuff to him. I'm not really sure if this tolerance is something you build up to over time or whether you are born with it, but it amazes me what he can eat. He really wanted me to make hot sauce with these peppers, but I had my heart set on pickles. I found a recipe that pickled them whole, but in hind sight, perhaps I should have cut them up and seeded them. Some of them were too big for the jars, so I ended up squishing them in, or cutting them in half which released the seeds, which are the hottest part. I think I'll let Hugh try them first.

Remember to wear gloves when you work with hot peppers, and wash your work station extremely carefully when you are done. Just touching your eye, nose or mouth after handling peppers can cause an angonizing amount of pain and trying to wash it after the fact can sometimes just spread the pain around. I speak from experience.

This recipe is from Martha Stewart Living, March 2010. The recipe suggests using quart-size jars and given my difficulty getting them in, I see the point. However, my quart-size are at my cottage still, so pint-size it had to be.

Check out more recipes for Snacks