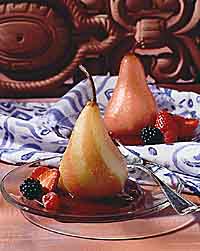 Vary the look of this dessert by leaving some peel on the pears. To make stripes, peel off a curved strip using a vegetable peeler or paring knife, then leave the next strip of peel on the pear. After poaching, the remaining peels can be removed from the pear to reveal the white flesh. The sections that were peeled before poaching will be pink.