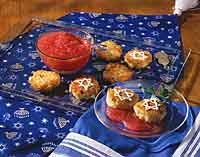 Whether served on a platter or as individual servings, this savory side dish adds just the right touch to your holiday meal.

Check out more recipes for Jewish