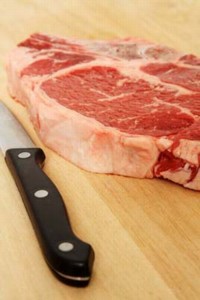 Q. I see game meats at my grocery store, but I'm not sure how to prepare them. Can you describe the different kinds of game meats that are available, and how to cook them?

A. Game meats are becoming more common not only on restaurant menus, but for home cooks, as well. Don't be scared away by these unusual meats -- most are very flavorful and easy to prepare. While some may appear on your supermarket's meat counter, you may need to special order others from your butcher.

Buffalo, also referred to as bison, is similar in taste to beef. It is high in protein and very low in cholesterol. It also has about half the fat and calories of beef. Buffalo should be cooked slowly at a low temperature and should be served rare to medium-rare.

Ostrich is a tender, lean red meat with a somewhat delicate flavor, and it is extremely low in fat and cholesterol. Quick grilling and sautéing are the best cooking methods.

With virtually no fat and lots of protein, farm-raised rabbit has a sweet flavor and is an excellent alternative to chicken. Cook rabbit as you would chicken -- grill, sauté, roast or braise.

Venison is low in fat, calories and cholesterol. Like buffalo, it is a healthy alternative to beef. It has a richer flavor than beef and should be cooked quickly over high heat and served rare to medium-rare.

Q. I tend to serve Italian sausage all the time. What other types of sausage can I serve for a change of pace?

A. Sausages are believed to date back over five thousand years. At one time, they were considered sinful and were ultimately banned. Later, they were served by an American president to the King and Queen of England. Virtually every culture has its own variety of sausage and every variety has numerous variations.

We all know about Italian sausage, bratwurst, and frankfurters, but you might want to try the following varieties:

Unless you are planning on carving at the table, place the meat on a large cutting board with a well at one end to hold the juice. (Or place a cutting board inside a shallow baking pan with a rim. The juice will collect in the baking pan.) Use a long, sharp carving knife to slice the meat and a long-handled meat fork to steady the meat while carving.

When carving beef, pork, veal, or lamb, always cut across the grain. This gives you a more tender slice of meat.

Q. Why do recipes tell you to let roasted meat "stand" for a while before carving?

A. Meat temperatures continue to rise for a few minutes after the meat is removed from the heat, so generally, you should remove meat from the oven when it is 5°F to 10°F from its final cooking temperature. A stand time of 10 to 20 minutes for large cuts of meat, such as roasts, turkeys, and whole chickens, is recommended to allow the meat to finish cooking without drying out.

Not only does this prevent overcooking, it also makes the meat easier to carve. Many experts also believe that standing permits the moisture in the meat, which comes to the surface during cooking, to return to the tissues, thereby making the meat moister.

Favorite Pizza Toppings in 10 Countries
How do you grill lobster tails?
10 Easy Low-sodium Recipes for Dinner