Why is a tomato called a love apple? 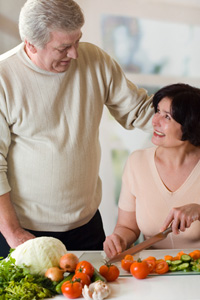 Are tomatoes responsible for an amorous mood?
©iStockphoto.com/g_studio

In 1544, Italian herbalist Pietro Andrae Matthioli made the first reference to the tomato's presence in Europe when he wrote about the "pomi d'oro," or apples of gold [source: Smith]. It's likely that the first tomatoes in Europe were yellow ones, hence the golden description. Matthioli went on to classify them as similar to the mandrake plant. As we mentioned on the first page, the mandrake plant was associated with many poisonous plants, such as nightshade, but it also renowned for its aphrodisiac qualities. In the book of Genesis, Rachel and Leah concocted a love potion out of mandrake roots; the Hebrew word for mandrake, "dudaim," can be translated as "love apples" or "love plants" [source: Smith]. Some foods prominently featuring spaghetti are associated with sex to this day; consider the 20th century creation of puttanesca sauce, which is translated as "whore's spaghetti" [source: Seed].

While it's possible that tomatoes are called love apples because of their aphrodisiacal qualities, there is one other theory to consider, which unfortunately is much less spicy than the first one. This theory has to do with how the tomato migrated through Europe. Spanish travelers brought tomatoes to Europe in the 16th century; as we mentioned, the Italians deemed them pomi d'oro. But at this time, there were Moors in Spain, and they took the tomato back to Morocco, where they called it pomi dei mori, or "apple of the Moors." When the French got hold of the tomato, they called it "pommes d'amour," or apples of love. Did they call it that because of its association with the mandrake plant, or was it simply a linguistic slip-up? It's possible that "pommes d'amour" was derived from its similarity to "pomi dei mori" or even "pomi d'oro" [source: Ray].

Today, Italians still love a good pomodoro, while English-speaking people use the Aztec-inspired word tomato. But regardless what you call it, there's plenty more to learn about this fleshy fruit. Head on over to the next page for more great articles on tomatoes.

The Once-banned Gooseberry Has Made a Comeback in the U.S.