by Sara Elliott
Prev NEXT
5 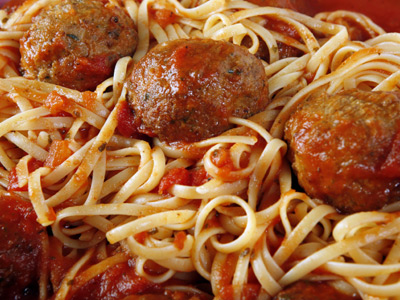 The question is: meatballs or no meatballs?
adlifemarketing/iStockphoto.com­

­Italian immigrants originally introduced spaghetti to the United States in the late 19th century. Where early Italian versions were less meaty and probably baked, the abundance of meat, a scarce commodity in Italy, distinguished this newer version as an American original.

Franco-American started canning spaghetti as early as the 1890s, and today you can find canned spaghetti as well as dry spaghetti mixes, microwave entrees and frozen dinners in every neighborhood grocery store. There are entire restaurant chains that rely on spaghetti as their signature dish, and whether you like yours chunky or smooth, with whole-wheat noodles or with a few mushrooms thrown in, it's a good bet that spaghetti in one form or another will be a hit at your house [source: The Nibble].

During times of financial struggle, spaghetti has always been considered a good value. During World War I, when imports of foreign manufactured pasta were stopped, the demand for domestically made pasta soared. During the Great Depression in the early 1930s, spaghetti and other inexpensive entrees, like soup, became staples of the American diet.

Some simple tips will help you make perfect spaghetti every time:

On the next page, we'll see what's simmering in the slow cooker.