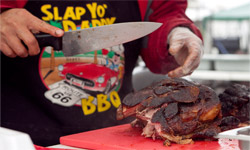 Put down that pulled pork. You didn't know that making barbecue was a sport? It is, and TLC's new show, "BBQ Pitmasters," fills you in on it as it trails some of the biggest names in barbecue as they travel around the United States to competitions. "There's a whole world out here that's like NASCAR racing," says Myron Mixon, one of the show's pitmasters. "You have sanctioning bodies and circuits."

Do you want to become a respected member of the barbecue brethren, a genuine pitmaster? Start at small, informal contests. Then work up to an event sanctioned by the Memphis Barbecue Network. If you win at that level, you're off to the World Championship Barbecue Cooking Contest in Memphis.

At Memphis in May, you face up to 300 teams and have about 24 hours to cook a whole hog, whole pork shoulders or pork ribs. With your best salesmanship, you present your barbecue at the grill, as well as in a blind box, where your meat sits in a lowly, numbered Styrofoam takeout container with nothing but some lettuce garnish.

Then you hope for the best.

Mixon started barbecuing with his father, Jack, in southern Georgia when he was 11 or 12. When his father died in 1996, Mixon decided to compete to help sell the family's barbecue sauce. In his first competition, he won two first places and a third.

"You can jump out of your backyard into this," says Mixon. "From that day on, I was hooked." He named his team Jack's Old South and became a world champion five years later. Then, he won two more times.

We listened to Mixon's seasoned advice on how to cook winning barbecue. Fire up your grill and read on for his top five tips.