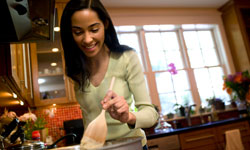 Cooking might be a key to human evolution.
David Sacks/Getty Images

Most people think what sets humans apart from chimps is just 4 percent of our DNA. It turns out, it's also our roast turkey, baked potatoes and sautéed asparagus.

According to a Harvard anthropologist, cooking is the key to human evolution [source: NPR]. And if cooking is uniquely human, our cooking must say something about us: Are we fancy? Simple? Creative?

Whatever our food-preparation methods indicate about our personalities, one thing is clear: There's always room for improvement. Since few of us have time for cooking school in our busy schedules, perhaps the easiest way to up our skills is by upgrading our tools. Here are 10 of the best cooking-appliance upgrades for improving the finished product. (Who knows, it could even make us better humans in the process.) 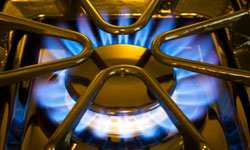 The stove is one of the most basic kitchen appliances. It's where we fry, sauté, boil and steam, and all of these cooking methods can be taken up a quality notch with one simple switch -- from electric to gas.

An electric stove is certainly straightforward: You turn a knob and voila! You have a hot surface. The problem is, that hot surface stays hot even when you turn the knob down, and it takes a while to get up to temperature when you turn the knob up. In other words, it's not responsive. When you're cooking something delicate like scallops or eggs or a sauce, responsiveness is crucial.

Gas burners are far more responsive than electric, because the gas flame is, essentially, the burner. Turn it up, there's more heat applied to pan; turn it down, and there's less -- instantly. There's no lag in temperature adjustment, so you don't end up with a curdled béarnaise.

Electric Ovens Are Even 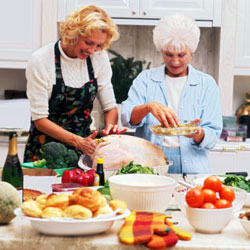 That turkey will cook more evenly if it's placed in an electric oven.
Photo courtesy of USA Blog

What goes for the stovetop goes opposite for the oven: For baking, roasting and broiling, electric makes for better results.

The best heat is even heat -- that's the way foods get cooked all the way through, and cooked the same amount all over. A gas oven typically has a single, centrally located heating element on the top and another on the bottom. This makes the oven hottest in the middle. If you put a whole pan of cupcakes in there, the ones at the edges are probably going to be less done than the ones in the middle.

Convection Ovens Are Really Even (and Fast!)

Convection works by circulating hot air all around the food in the oven space. It's the most even way to roast, bake and brown, because the heat is quite literally surrounding every inch of the food at all times. Sometimes the heating elements are in the top and bottom of the oven, and sometimes they're in back. Either way, there's a fan that keeps the heated air moving around the food, so there's no need to turn the roast or switch the pans around when using more than one rack. Everything gets heated to the same degree.

In many cases, a convection oven is not only more even but also faster than a regular oven, because the heat is constantly moving around the food, basically infusing it, whereas the heat in a nonconvection oven just sits there.

Infrared light (aka "heat") is all well and good when you've got the time, but every now and then you need to nuke.

All microwave users are familiar with the downsides of speed, among them occasional sogginess and the total inability to brown. An upgrade to halogen light can solve those issues at near microwave speeds.

Halogen ovens combine the roasting, baking and broiling abilities of a traditional oven with the convenience of a microwave oven. Halogen cooking, which typically fuses a traditional electric heating element, a fan and a halogen bulb, is anywhere from 40 percent to 50 percent faster than regular cooking, and it can still produce a crisp result [source: JML].

A halogen/microwave combination oven can be a great upgrade for those who want to be able to quickly roast a juicy turkey but still have the option of nuking some microwave popcorn. 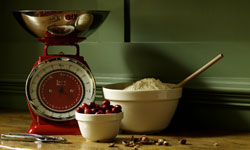 They're not just for dieters. Kitchen scales are a serious baker's best friend, and they can help make anybody's cupcakes (or cheesecake or banana bread) a lot more expert-tasting.

The thing about baking is that recipe amounts, especially for things like butter, sugar, flour and baking soda, aren't guidelines. They're very exact instructions - baking is chemistry, and all of basic ingredients react with each other to produce yumminess. If you're off by even a gram or two in the sugar, it'll affect your cake, and a gram isn't much [source: Kitchn]. One cup of granulated sugar weighs about 200 grams [source: JoyOfBaking].

This is why many baking cookbooks (especially European ones) list amounts in terms of weight, not volume. Investing in a kitchen scale, which can be as cheap as $20 and won't take up much counter space, can make a big difference in your finished product without putting a big dent in your budget. 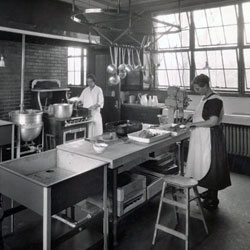 This test kitchen may value size over quality, but for your personal cooking, it's worthwhile to invest in high-quality cookware.
Photo credit of In.gov

There's a reason why so many couples put expensive pots and pans on their wedding registries: They make a difference in the food. There are at least a few reasons why.

First is responsiveness, and it's pretty much the same thing that makes gas burners preferable to electric. The faster a pan responds to a change in heat, the more precise control the cook has over the food inside it. Heavy-gauge pans of copper and/or aluminum are highly responsive [source: Cooking Inn]. They also allow for more even cooking over the entire surface of the pan, so you don't end up with food being underdone or overdone depending on where it is in the pan.

Beyond heat management, you might want to invest in a couple of pots or pans that suit particular purposes. For cooking acidic foods, like tomato sauce, you'll want a nonreactive pan or else the food can take on a slight metallic taste. And for cooking white sauces and eggs, it's best to avoid all-aluminum, which can turn those foods kind of gray.

If you do much baking, you probably have a mixer of some sort. It's hard to cream butter and sugar without one. If you've been getting by with a hand mixer, you might consider upgrading to stand mixer to improve your baking.

A stand mixer -- that heavy unit with the bowl that locks in place and spins beneath the spinning attachments -- has two big things going for it: power and ease. It has a lot more juice than a hand mixer, which means you can get egg whites even frothier for that meringue pie. It also typically has more speed settings, so you can be more exact in your preparations.

In terms of ease, there's simply no comparison. A stand mixer spins on its own, so aside from the occasionally scraping of the bowl, you're free to work on other parts of the recipe while the mixer does its thing. Plus, there are lots of instances where, for the best results, you need to add an ingredient slowly while you mix, which can be difficult to do with a hand mixer. A stand mixer was made for that type of job.

A freezer's a freezer, right? Any one will do for freezing ingredients you'll be cooking with in a couple of weeks? Not really. Speed counts when freezing food, so a colder freezer is going to make your starting ingredients taste better.

For the most fresh-tasting frozen foods, you want a freezer that can easily reach and maintain 0 F (-18 C) -- and preferably even colder. Any warmer than that, and quality is going to degrade. For each 5 degree increase in temperature, in fact, that degradation is going to happen twice as fast [source: Willenberg].

If you store your food in a powerful freezer and make sure you wrap it up right, it'll taste pretty much like it did before you froze it. It'll be just as nutritious, too.

Another freezer-related issue to keep in mind: Seasonings don't keep. It's best to add things like salt, pepper and garlic powder after the food defrosts, right before you eat. 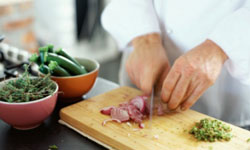 Who doesn't love eating a good stew? It's hearty, tasty and hot -- perfect for a winter's evening.

Who doesn't love making a good stew? Anyone who doesn't have good knives, probably. Knives are about the most important cooking appliance out there (chefs all bring their own wherever they go -- at least on "Top Chef"). They slice, chop, filet and mince with precision and ease, making food both look and taste better. They're also safer and more comfortable.

They don't come cheap, though. Fine, well-designed cutlery, often made of high-carbon steel or ceramic, can be expensive, in the area of $100 or $200 for a single knife to start. But most cooking pros will tell you it's worth it. You don't need a whole set. One or two good go-to knives (including a chef's knife) is enough for most home cooks. If you hardly ever de-bone fish, for instance, the boning knife might be the place to go cheap (stainless steel, usually).

Most cooking tools are about producing a great dish. And certainly the most important things are taste and appearance: The food we most want to eat both looks and tastes appetizing. Unfortunately, achieving those qualities doesn't end when the food is cooked. It ends when it makes it to the table and into people's mouths.

That's where a warmer comes in. A warming drawer, typically positioned below the oven in a range unit, although it can also be a totally separate device, can get plates and bowls warm so they help the food stay hot once you plate it, and it can keep plates of food warm until you're ready to bring them to the table.

It's a luxury, no doubt, but one that could be worth the investment if you're into a professional-grade meal. Even the best-cooked hot food starts to go downhill as it cools. There's not much point in cooking your Alfredo sauce in a nonreactive pan over a gas flame if it's just going to congeal by the time you sit down to eat it. 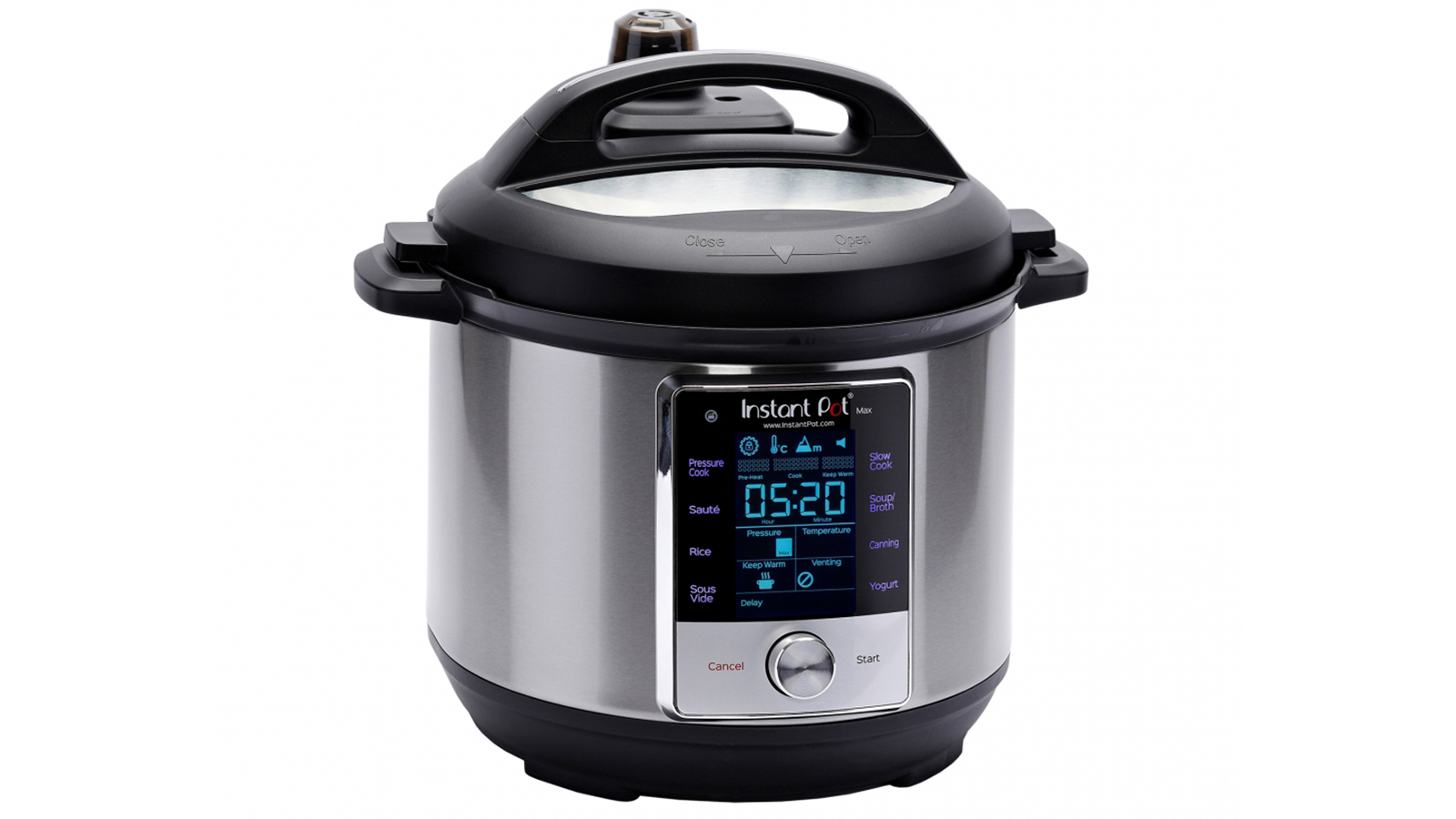 Instant Pot is all the rage. But what's the deal? What makes this pressure cooker so great? HowStuffWorks gets cooking.