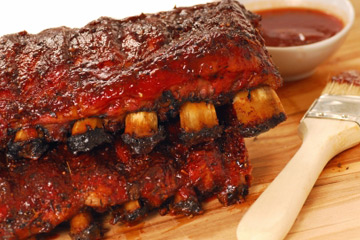 Extreme Grilling Image Gallery The flavor of your ribs will depend on where you are. Check out these extreme grilling pictures.
©iStockphoto.com/HHLtDave5

Barbecue sauce has been used to help add flavor to grilled and smoked meats for as long as 300 years, depending on whom you ask. The history of barbecue sauce isn't exactly clear, but we know that the mustard-based sauce that's native to South Carolina has been traced back to 17th-century Germany [source: Dufusut]. All barbecue masters have their own special sauce recipe, but depending on where you set up your smoker in the United States, you'll probably use a different style of sauce. This is because each region, sometimes even within a state, has its own signature style. Sauces are used in a few different ways. Some meats and ribs are marinated in sauce and then grilled and basted. Other meats, like beef brisket and pork butt, are typically cooked with a dry rub and then sauced after they've been sliced or pulled.

Kansas City is known for sweet and lowdown jazz music and great barbecue. This region's tomato-based sauce's signature element is that it's extra thick and spicy. This is due to the addition of molasses and sugar, both of which thicken the sauce and give it a nice, sweet taste. Vinegar is another key ingredient, which lends a particular flavor element. Many of the big brand sauces you'll find in mainstream grocery stores are more like Kansas City style sauce than other regions.

Texas style barbecue is generally dry rubbed and slow cooked. The sauce is usually on the side, and many chefs like to serve it warm. It's known for being on the spicy side and thinner than a Kansas City sauce. This allows the sauce to penetrate the meat fully, as opposed to sitting on top like thicker sauces tend to. Some Mexican influence can be seen in many Texas style recipes, with liberal amounts of hot peppers, chili powder and cumin added to the tomato-based sauce. As with most sauces, vinegar is also important for the tangy flavor, but unlike other regions, some Texas recipes contain coffee.

North Carolina has a couple of different styles of sauce. The sauce in the Eastern area of the state is vinegar based and very thin. Little to no sugar is used in these sauces, so they aren't sweet, but instead, rather bold and spicy. A liberal amount of sauce is traditionally added to chopped pork or beef brisket, which is served wet. The sauce in Western Carolina is also thin, but it uses a little bit of tomato or ketchup, resulting in a pinkish sauce.

The meat of choice in South Carolina is pork, and the signature sauce is mustard-based. Vinegar, sugar and spices are added to yellow mustard, along with other ingredients like lemon juice and butter, depending on the recipe. Honey or syrup is often added to thicken it slightly and add a sweeter edge. In some parts of South Carolina, small amounts of ketchup are added, but most of the sauce recipes are strictly mustard.

The first bottled hot sauces originated in Louisiana, where hot sauce is favored over barbecue sauce. 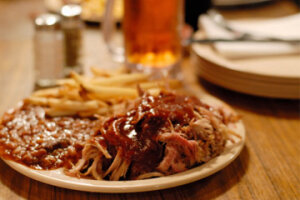 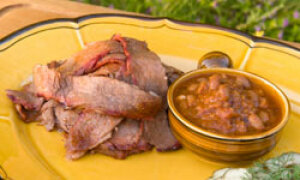