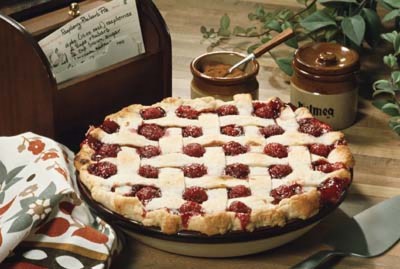 Making a lattice-top pie crust is easy with these pie baking tips. Check out these holiday noshes pictures.
©Photodisc

Q. How can I make decorative pie crusts like the ones I see in bakeries?

A. To create decorative pie crusts like a pro, simply choose one of the techniques below.

The first step in making a decorative pie crust is to trim the edge of the bottom crust even with the pie plate. Cut desired shapes from the remaining pastry using a tiny cookie cutter, thimble, or bottlecap. Moisten the pastry edge. Place cutouts on the pastry edge, slightly overlapping. Press them into place.

Woven Lattice Top pie crust: Leave the overhang on the bottom crust. Cut the top crust into ten 1/2-inch strips. Place 5 strips evenly across the filling. Fold every other strip back. Lay the first strip across in the opposite direction. Continue in this pattern, folding back every other strip each time you add a cross strip. Trim the ends of the lattice strips even with the crust overhang; press together. Fold edge under; flute.

Pinwheel pie crust: Fold the overhang of bottom crust under; press flat. Cut slits around the edge of the pastry the width of the pie plate rim, leaving about 1 inch between slits. Fold under on a diagonal to form pinwheel points.

Rope Edge pie crust: Fold the overhang of the bottom crust under and make a stand-up edge. Press your thumb into the pastry at an angle. Pinch the pastry between your thumb and the knuckle of your index finger, rolling your knuckle towards your thumb. Place your thumb in the groove left by your finger and continue around edge.

Fork Edge pie crust: Trim the edge of the bottom crust even with the pie plate. Press to the rim of the pie plate using a 4-tined fork. Leave about 11/4 inches between marks. Go around the crust edge again, filling in spaces with the fork held at an angle.

Q. My bottom pie crusts never cook completely or get brown. What can I do?

A. There are several things you can do to fight "soggy bottom," according to Sharon Tyler Herbst, author of The Food Lovers' Tiptionary (Hearst, 1994):

Q. My husband loves lemon meringue pies, but every time I make one, the meringue drops. It looks great when I first take it out of the oven, but then it just flattens. What's the secret to a high, fluffy meringue?

A. A couple of things could be hampering your progress in making the perfect lemon meringue pie. From beating the egg whites to topping the pie, here are some tips that should help make your next meringue stand tall and fluffy.

Make sure the bowl and beaters you use are clean and dry, and that no trace of yolk gets into the whites -- even the littlest bit of grease will cause the meringue to lose volume. Adding cream of tartar to the egg whites will help them stiffen as they are being whipped.

After the whites have formed soft peaks, beat the sugar in slowly -- one tablespoon at a time -- so that it can dissolve completely. When topping the pie with meringue, make sure the filling is hot. This helps cook the base of the meringue and makes it less likely to "weep," or shrink from the sides of the pie crust. Spread the meringue so that it touches the crust all the way around; this prevents it from shrinking from the pie shell later.

Once the pie has cooled, store it in an airtight container to ward off moisture, which also causes meringue to weep.

Q. What's the best way to peel peaches for pies and tarts?

A. Here are a couple of easy methods: First, you can simply dip the peach in a pot of boiling water for about 30 seconds. Shock the peach in a

bowl of ice water and, when it's cool, peel the skin right off with a small knife.

Or, you can place 1 cup of water in a microwavable bowl; heat it at HIGH for 3 to 4 minutes until it comes to a boil. Add your peach and let it stand 1 to 1-1/2 minutes. Shock the peach in a bowl of ice water and peel.

Can you freeze eggs to keep them longer?
How to Roast Meat
Parchment Paper Questions