If you started a meal with Korean soup, followed by an entrée of traditional Italian pasta, wouldn't you wonder if the kitchen mixed up your order? Maybe — but it turns out that eating a mismatched menu may ultimately be more satisfying, according to food science researchers at Drexel University.

A team of researchers analyzed 143 participants' satisfaction ratings after eating a specific series of dishes, publishing their findings in the journal Food Quality and Preference. While everyone ate a main course of pasta aglio e olio — al dente pasta seasoned with garlic and olive oil — not everyone received the same appetizer beforehand. One group ate Italian minestrone, a soup of vegetables and beans, as an appetizer, while the other group received Thai tom kha, a spicy soup made with coconut milk, chicken, chili paste, fish sauce and other seasonings.

The culturally varied appetizers weren't the only differences researchers introduced. They made two versions of each soup, one that was designed to just be mediocre and one that was supposed to taste excellent. Researchers found that when participants had the mediocre Italian soup to start, they enjoyed the overall meal more. However, they enjoyed the main course and overall meal less when they ate the better Italian soup first.

Researchers posit that the enjoyment of a main course can be negatively affected by an appetizer that is too tasty, suggesting that putting your best foot forward first may not do a restaurant any favors. However, varying the culinary traditions represented in sequential courses could improve a negative response to an overall meal — or avoid a negative response altogether.

That's good news for buffets that serve a mashup of cultural cuisines — looking at you, Las Vegas and cruise ships —and important news for restaurants who may be ready to veer from traditional menu lineups. It seems that surprising the senses can be satisfying, especially when it comes to food choices. The study didn't look into cultural fusions within one dish, though. (Sorry, trendy Korean tacos.)

Now That's Interesting
An intermezzo, or palate cleanser, is a one- or two-bite serving of a light flavor served between courses — often just before the entrée arrives.

A Storm Is Brewing: The Trouble of Malware in the Cloud

Should Restaurants Charge a Penalty Fee for Uneaten Food? 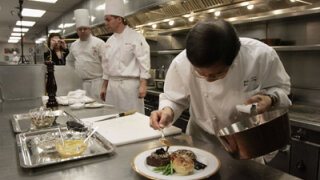