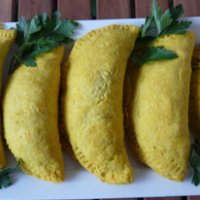 Okay, you don't phone out for Jamaican patties, but they are still a take-out food. I certainly never thought of making them myself. Our neighbourhood has a big Jamaican population and every corner store has a pile of patties waiting to be re-heated. It's a pretty common street food around here and you often see kids eating patties on their lunch break.

The Jamaican patties around here have ground beef in them, but these are vegan. I've been digging in a new cookbook called Vegan Soul Kitchen by Bryant Terry which has recipes from African-American cuisine. This style of cooking is new to me, so I gave the book to my daughter and asked her to choose something she would like me to make, and she instantly chose the patties. Her stipulation—the pastry had to have the correct colour, which is a fairly bright yellow. On looking over the recipe I saw turmeric in the pastry part, so I knew I'd be okay.

This is really a snack food, but I made a salad and we ate them for dinner. They re-heat well, so you could make them in advance and then have a quick after school snack for the kids. Don't be put off by the long list of ingredients, they were easy and really fun to make. I think you could easily make vegetable substitutions if you like. I left out the corn because I didn't have any, but I used everything else. I also used vegetable oil rather than coconut oil. My daughter thought the Jamaican flavour could have been bumped up a bit, but that would just be a matter or increasing the amount of spices, and it's really just a matter of personal taste. In any case they looked just like the patties you buy, and I thought they were mighty tasty.

Check out more recipes for Vegetarian