What are the low-sodium seasonings, if they exist?

Browse the article What are the low-sodium seasonings, if they exist? 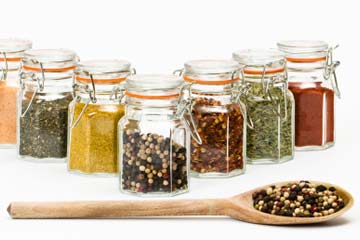 Flavor packets are often big offenders, so add your own spice combo to make sure your food is safe from added sodium. See more spice pictures.
©iStockphoto.com/Chris Elwell

Salt may strike you as a run-of-the-mill staple on your kitchen table, but it's actually held a lofty place through the ages. Historically priced at a point comparable to gold, salt has even been currency in its own right at times. Roman soldiers were occasionally paid in salt, and the root of the English word comes from the Latin word sal. That's where we get the modern word "salary."

But salt, or rather the sodium chloride that comprises standard table salt, has been somewhat demonized in recent years. That's because while it's an essential mineral necessary for life, in large quantities it can cause health problems like high blood pressure, which, in turn, can contribute to heart attacks and strokes. And when we say large amounts, we're not talking much: The American Heart Association now recommends most people limit their salt intake to just 1,500 milligrams of sodium (about half to three quarters of a tablespoon of salt) per day [source: American Heart Association].

So how to add some savory flavoring without all the sodium? Actually, salt's not really necessary for seasoning because there are lots of other tasty alternatives. Spices, herbs and oils can all add some sought-after seasoning without loading you up on salt. A little lemon juice can put pep in foods like salads, vegetables, poultry, fish and other lean meats, and garlic can also go with those, plus potatoes, soups and tomatoes.

In fact, if it's meats you're preparing, you have a whole host of options to chose from, whether it's turmeric or thyme, paprika or parsley, rosemary or sage, bay leaves or basil. If you're trying to get some more vegetables in your diet, many of those will work, too, as well as summer savory, caraway seeds, chives, pimiento and dry mustard. So head down the baking aisle, browse the spice section and pick out some potential candidates for your next meal. Cider vinegar and red wine vinegar are options, too.

Just make sure if you go grabbing for a spice jar with "onion" or "garlic" written on it, you're reaching for ones that say "powder" and not "salt." Otherwise, you're accidentally adding the very sodium you were looking to avoid. Bouillons are similar -- be sure to check the labels, or make your own. For more tricks on eating smarter, visit the links on the next page.