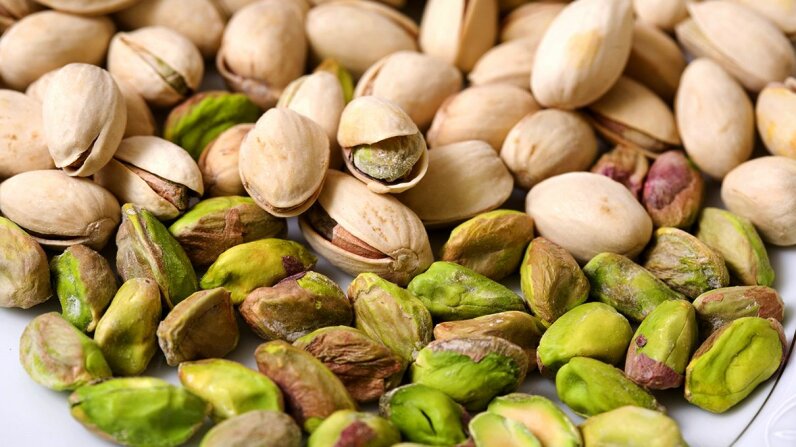 In recent years, pistachios have been getting a lot of attention, and not just because of those clever TV commercials featuring Snoop Dogg eating them out of a pill bottle and Ernie the elephant falling off a treadmill. Americans consumed close to 100 metric tons of pistachios in 2013, the most recent year available, which works out to just about 11.4 ounces (323 grams) per person, according to International Nut & Dried Fruit, a nut industry organization. That represented a more than 60 percent increase compared to just four years earlier.

Why are we eating so many pistachios? One reason, obviously, is that we like the taste. But pistachios also have developed a reputation as a guilt-free snack with plenty of nutritional benefits, rich in unsaturated fats, fiber and antioxidants. Research suggests that pistachios could help to reduce hypertension and promote development of beneficial gut microbes. They're even gaining credibility as a tool for weight loss — partly because, like other nuts, they give a person a full feeling, and partly because the extra work needed to crack their shells and extract them helps to slow down consumption. In one 2011 study, subjects who snacked on pistachios they had to remove from their shells consumed 41 percent fewer calories than those who were given pistachios with the shells already removed.

To harvest pistachios, growers use a machine aptly called a shaker to shake the nuts loose from their trees and catch them as they fall.
GomezDavid/Getty Images

But that leads to another question. Why are pistachios one of the few nuts commonly sold to consumers with their shells still attached?

To roast and salt nuts like walnuts or cashews, producers need to remove the protective shell. But the reason that's not so for pistachios? Between 70 and 90 percent of pistachios develop a natural split in their shells during the growing process, says University of California, Davis pistachio expert Louise Ferguson, co-author of the "Pistachio Production Manual." After those pistachios are shaken off the trees by harvesting machines, they can be salted and roasted while still inside the shells as that natural crack allows heat and salt access to the nut, eliminating a step in the industrial process and saving processors some money.

"The pistachios that split naturally generally are your larger nuts," says Ferguson.

Only the minority of nuts that don't split on their own are run through industrial shell-removing machines. Though some experts think the unsplit nuts might be less mature than the split variety, Ferguson said there really isn't much of a discernible taste difference.

"By the time you get them, they've been roasted, anyway," she says.

Most of the pistachios without shells end up being used in cooking, and to make products such as pistachio ice cream. Ferguson adds that pistachio use as a recipe ingredient is a growing trend in the industry.

Assuming that you're not a person who enjoys the sensual experience of cracking the shell and extracting a pistachio, which is a better deal to buy — with shells, or without? A whole single pistachio, shell and all, weighs about 0.02 ounces (0.57 grams), and the kernel or nutmeat — that is, the portion of the pistachio that you eat — makes up about 53 percent of that weight. You might suspect that would make pistachios without shells cheaper. But if you look at the prices charged by retailers, pistachios without shells tend to be more than twice as expensive per ounce as the ones in shells, so all you save is the trouble of extracting them, and pay a hefty fee for that luxury.

And if you're going to shell your own pistachios, give this ingenious method of cracking open pistachio shells: BuzzFeed suggests using a spent shell as leverage to pop open the next nut.

Now That's Interesting
Pistachios weren't cultivated in the United States until 1930, when botanist William E. Whitehouse went to Iran and returned with 20 pounds (9 kilograms) of nuts that he used to grow pistachio trees.