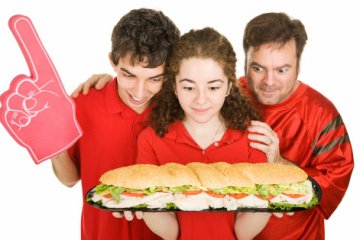 That's a pretty big sandwich, but it's definitely not the world's biggest sandwich!
iStockphoto/Thinkstock

In 2008, some folks in Iran built a 4,921-foot-long sandwich filled with a whopping—scratch that, nearly inconceivable—1,543 pounds of ostrich meat plus another 1,543 pounds of chicken. That’s right: more than 3,000 pounds of meat. Unfortunately for everybody involved, the massive concoction proved too irresistible: just as official tape-measure wielders from the Guinness World Records were getting ready to make a call, crowds of onlookers bum-rushed the tasty treat and, well, ate it. Better luck next time?

Fast forward to 2010, when determined sandwich-makers in Dubai earned rank on the Guinness Book of World Records for their 1.65-mile-long sandwich consisting of 600 jars of cream cheese, 1,900 pounds of vegetables,1,100 pounds of tomatoes, 584 pounds of cucumbers, and 220 pounds of olives. This vegetarian delight took just three hours to assemble by a team of 250 volunteers, beating out a record that had previously been set in Italy. What’s more, the whole charade went down in an outlet mall! “We had to lay three rows of tables across the mall,” said a rep.

But perhaps no year matches 2012 in terms of utterly bonkers sandwich-building. Let’s face it: Mexico, Milwaukee, and the UK have very little in common, food-wise, but all three locales have tossed their hat into the sandwich-making records ring this year.

First up, Milwaukee, where the first annual Baconfest, sponsored by local radio station 102.9 The Hog, took place this winter. In a brilliant, news-making stunt, some folks took it upon themselves to concoct the world’s largest peanut butter, bacon, and banana sandwich. The behemoth, consisting of eight pounds of bacon and 120 pounds of peanut butter piled atop a bread “slab measuring 3.5 feet by 14.5 feet, totaled a whopping 500,000 calories. (Somehow the banana in this equation seems like an afterthought!) Anyway, fairgoers were quite pleased to have the monstrosity cut up into normal-size sandwiches and served right then and there.

A couple of months later, British chef and restaurateur Tristan Welch devised a true “carnivore’s dream,” as it was called at the time: a sandwich consisting a whopping 41 types of meat, including of 3.1 pounds of ham, 4.4 pounds of salami, 2.2 pounds of sausage, and 1.5 pounds of chorizon, among many, many, many others. Doesn’t sound like much, right? Think again: Welch’s creation, which coincided with the UK debut of the Food Network series Man v. Food Nation, happened to measure two feet long and 15 inches high. Food Network UK has billed it as “the world’s meatiest sandwich” and “an epic creation” that “only the very brave will take on.”

Finally, a team of devotees in Mexico City endeavored to create the longest sandwich in the world this summer, and while they came up short, 154 pounds and 173 feet long is nothing to scoff at. Thousands of pieces of bread, lettuce, onion, and tomatoes were involved in the mission, which included more than 70 total ingredients and qualified as the largest sandwich ever to be created in Latin America. In all, 55 local businesses got their hands dirty for the oh-so-delicious “super torta” that was designed as a means of increasing public awareness about local small businesses.