Browse the article Your Yogurt Is Probably Loaded With Sugar 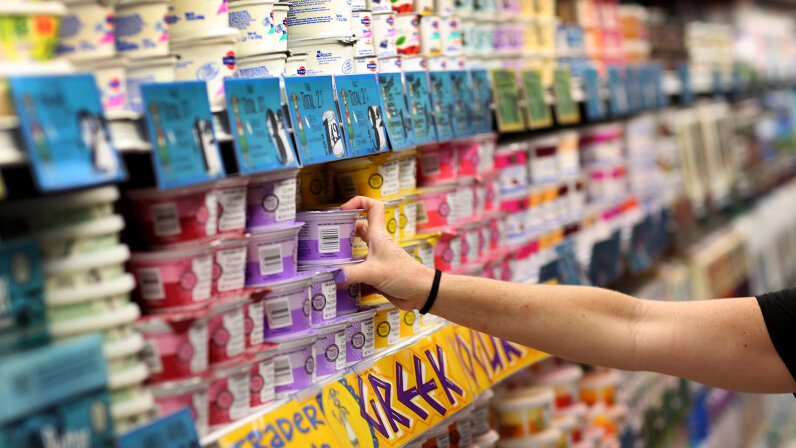 A shopper picks out yogurt at a Trader Joe's in Pinecrest, Florida. Joe Raedle/Getty Images

Read the nutrition label on the back of a typical carton of yogurt and pay attention to the amount of sugar. Did the health halo around your favorite snack just get a little dimmer? Some yogurts — even those in the organic category — have more sugar than a 12-ounce (.3 liter) can of Coca-Cola.

That's too much, according to a new study published in the British Medical Journal. British nutrition researchers evaluated more than 900 different yogurt products, including drinkable yogurts, yogurts marketed to children, organic yogurts and Greek-style yogurts, and found that most have too much sugar, meaning more than 10 grams of sugar per 100 grams — or 3.5 ounces — of yogurt.

To put it into perspective, 10 grams is about 2.5 teaspoons of sugar, and recommendations for children from the American Heart Association and the World Health Organization (WHO) suggest limiting children to 3 to 6 teaspoons of added sugar per day, depending on age.

The added sugar in yogurt is too much for adults, too. WHO's recommended guidelines, mirrored by the American Heart Association, suggest adult women stick to no more than 25 grams, or about 6 teaspoons, of added sugar a day; men, 9 teaspoons or 36 grams. Yet, a 6-ounce (177 milliliter) container of yogurt can contain 19 grams of sugar.

How did all this sugar get into yogurt, anyway? The most basic yogurt is nothing more than fermented milk. There's evidence that people 6,000 years ago added sweet things to balance the tang. Historians believe that biblical references to "the land of milk and honey" were a reference to yogurt with honey. But for modern Americans, even a sweet-tart combo is, for some, too tart. Like any business out to make money, yogurt makers changed their product to sell. (Take a look at the yogurt section now, and you'll find trendy flavors like pumpkin spice and salted caramel.)

"Fermented foods such as pickles, sauerkraut, kombucha and yogurt naturally have a tangy taste that unfortunately doesn't always appeal to taste buds that are used to sweet flavors," Julie Stefanski, registered dietitian and spokesperson for the Academy of Nutrition & Dietetics, says in an email. "Manufacturers have definitely been successful at broadening their products' appeal to a wider variety of consumers, but that entailed adding enough sweeteners to overcome yogurt's natural sour notes."

If yogurt can stray from its plain, tart origins to sweet pumpkin spice, there are other ways it can be re-interpreted, too. And now that includes how the U.S. government defines yogurt. That's because the government has decided to review the entire definition of milk. In a statement, Scott Gottlieb, the commissioner for U.S. Food and Drug Administration (FDA), said yogurt is a category where there have been "innovations," and those innovations now call for a new definition of yogurt. (A 2009 proposal was never finalized.)

Innovations like dairy-free yogurts made with coconut milk, almond milk, soy milk and hemp, and the varieties of fats used in yogurts, seem to be drawing the FDA's attention. The International Dairy Foods Association wants regular yogurt to simply be required to have more than 3 grams of fat per serving, whether that fat comes from milk or other ingredients, in order to avoid confusion over the definition of low-fat yogurt.

How the FDA ultimately defines yogurt is still pending, but in the meantime, how do you navigate the ever-growing yogurt section if you want to avoid sugar?

"The good thing is, you can teach your own taste buds or your family's to appreciate a lower sugar yogurt," Stefanski says.

"Check out how much added sugar your favorite yogurt has and consider taking a step down. Sometimes lowering the added sugar you're currently getting in a yogurt can be as simple as picking a different flavor," she says. "If you're choosing a yogurt with a fruit on the bottom, it's likely to have a fairly high amount of added sugar. When you add your own fruit, you get more fruit and less sugar for the same number of calories. And you'll be fuller after eating the whole fruit as a bonus."

If you decide to buy plain yogurt and add natural sweeteners, you'll still want to be mindful of what you're adding. Honey and maple syrup, for instance, are tasty and natural sweeteners, but they actually have more sugar per teaspoon than table sugar. If you really want to add honey, only do it before a workout so you can benefit from the fuel the it can provide.

To help children break the habit of eating those sugary yogurts, try a step-by-step approach. "One way to shift young children or yourself over to a lower sugar yogurt is to begin mixing plain yogurt into your favorite option," Stefanski suggests. "Start with as little as a tablespoon and gradually increase the amount of plain yogurt to help their taste buds adjust."

And, if you are a yogurt fan, keep in mind it still does have health benefits. Go for plain Greek-style yogurt, or natural yogurt, both of which had lower amounts of sugar than others. "Yogurt remains a great way to add calcium and beneficial bacteria to our diets. Luckily, we have so many choices to pick from that everyone can find a yogurt that fits their sugar concerns, level of activity and taste preferences," Stefanski says.

NOW THAT'S EMPOWERING
Twentieth-century "Popeye" cartoons made us think of spinach as the wonder food that gave the sailor his strength. For Genghis Khan's army, the strength-giving food was yogurt. The founder of the Mongol Empire made sure his troops ate yogurt, as he believed it instilled bravery.