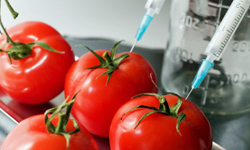 Currently, no genetically modified tomatoes are being sold in North America or Europe.
iStockphoto/Thinkstock

The tomato has the distinction of being the very first widespread genetically modified food available in the United States. Starting in 1994, the Flavr Savr tomato was bred with a deactivated gene that kept the plant from producing polygalacturonase, an enzyme that's the starting point for rot. Flavr Savr tomatoes were able to fully ripen on the vine and still be able to stick around for a while in stores. This helped stop the practice of harvesting the crop early and artificially ripening the tomato when it's closer to its final destination.

The tomatoes were a popular product for about four years, until the scientist who invented it went on television and expressed concern over whether the tomatoes could be carcinogenic. This led to bans of genetically modified foods at major food chains, as well as the end of the Flavr Savr tomato.