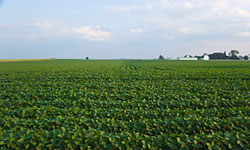 Even if you don't drink soy milk, you could be ingesting soy through foods like chocolate.
Juan Silva/Getty Images

Of all crops, soy is the most heavily modified. In 2007, more than half of the world's soy was made up of genetically modified strains. Soy is modified for a variety of purposes. Common modifications include increasing its resistance to insects and fungus, as well as enriching its vitamins or fat and protein content so it can be used for animal feed. Soy is also integral to creating chemicals for use in pharmaceuticals.

Since soy is one of the more heavily modified crops (and one of the most useful for additives), chances are in the United States that if the label says you're eating soy, you're eating genetically modified material. This isn't just tofu and soy milk either -- foods that include soy byproducts are very common and can be found in staples like bread, cereal, ice cream and chocolate.