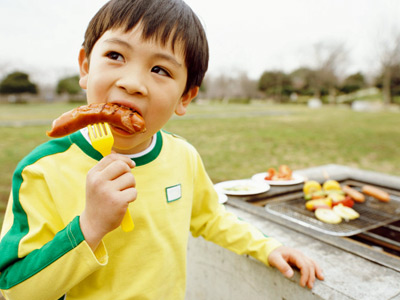 Food is the cheapest it's ever been right now. We live in an era where a fast food cheeseburger costs less than most supermarket vegetables. The food industry has become all about creating an abundant supply of food for less money, and this is where fillers come in. Food fillers are additives that help bulk up the weight of a food with less expensive ingredients, which helps keep the price down. Fillers are mainly found in the meat processing industry, and processed meats, like hamburger and sausage, are the best candidates to contain fillers. This is because meats are big ticket items in a food budget. Using meat fillers and extenders can lower the cost of meats by 10 to 30 percent [source: Heinz and Hautzinger].

Some non-meat fillers are starchy in their makeup, making them high in carbohydrates and low in nutritional value. One type of non-meat filler is known as a cereal binder and usually contains some combination of flours and oatmeal. These are often used in hot dogs. Other common fillers include bread crumbs and maltodextrine, a food additive made from starch. Rusk, a dry biscuit, can often be found in cheap sausages, and soya protein is a common ingredient in cheap hamburgers. Adding copious amounts of cheap fillers is a common practice in meat processing operations in developing countries to help reduce their production costs in line with their struggling economies. These fillers are tricky business for those who suffer from celiac disease, which is marked by intolerance for gluten. They're commonly found in products that contain wheat. This makes label reading a must. In some cases, fillers are added to enrich foods and up the nutritional value. Fiber is a popular choice, and fiber additives include wheat, bamboo, cottonseed and chicory. Other additives serve the purpose of increasing the minerals in meat products, and boast labels that read magnesium enriched or calcium improved. These types of additives increase nutritional value and command a higher price tag.

Another common type of filler in the meat processing industry is actually made of meat. MDM, or mechanically deboned meat, consists of cheaper materials from animal carcasses that's used to beef up, pun intended, meats. MDM usually consists of turkey and chicken meat, and some lower cost meats can be entirely made from MDM. Cattle, sheep and goat meats are not produced as MDM because of the risk of Bovine Spongiform Encephalopathy, better known as mad cow disease.

Extenders are a type of filler with more protein content, and are used to make the meat go further. Extenders usually consist of a cereal mixture combined with meat, fat, blood and internal organs and are common in processed meats such as hot dogs and breakfast sausages. Some products like Spam are made of processed meat containing extenders that's cooked and then packaged. The shelf life makes it handy to keep as an emergency food supply.

The shelf life of Spam is indefinite, but it will lose its flavor over time.