What exactly is pastrami? 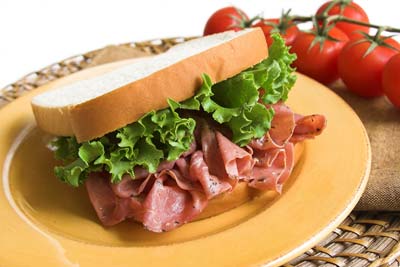 If you want to get poetic about it, pastrami is a way of going back in time. So is cheese, for that matter. Pastrami is a technology for preserving meat that our ancestors used before refrigerators. Cheese falls into the same category -- cheese is a non-refrigerated technology for storing milk. It turns out that pastrami and cheese both happen to taste good, so they are still very popular even though the preservation technology they each represent is no longer needed.

Prior to refrigeration, killing a large animal like a cow or a pig presented a problem. Either you had to have a huge party so you could eat the whole thing at once, or you had to find a way to preserve it. About the only way to preserve meat prior to the 20th century was by salting. If you add enough salt to meat, you kill all the bacteria in the meat and can preserve it for a very long time.

There are two ways to get salt into meat. You can coat the outside of the meat with dry salt and let the salt diffuse into the meat over several weeks. This is called dry curing. Or, you can make a salty brine (salty enough for a potato to float in) and let the meat soak in it for several weeks. There's still some possibility of spoilage -- the thing you have to worry about is bacterial problems during the time it takes the salt to penetrate. The easiest solution to that problem is to do your salting in the winter so you can take advantage of nature's refrigerator for a few weeks.

To make pastrami, you start by making corned beef. Corned beef is a beef brisket soaked in brine (with some sugar and spices). According to "The Joy of Cooking," corned beef "has nothing to do with corn but got its name...when a granular salt the size of a kernel of wheat -- corn to a Briton -- was used to process it." By smoking corned beef, you turn it into pastrami! Smoking adds flavor to the meat.