Sneaking Nutrition into Your Family's Diet 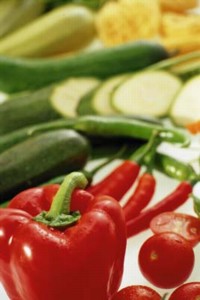 Sneak vegetables into family dinners by putting them in pizzas and pastas. See more pictures of vegetables.
©Image Source

A. First and foremost, don't tell your family that you're attempting to manipulate them into eating better. You know your family will eat healthfully only when they can be tricked into it. Announcing your plan would be like shooting yourself in the foot before you get started, so just don't.

And remind yourself often that this conversion to more healthful eating is not going to happen overnight. Don't let frustration get the better of you.

For many parents, the first -- and easiest -- thing to do is to simply not buy junk food or keep it in the house. A treat should be just that: a treat, a once-in-a-while thing. Rid the pantry of the junk and don't buy it routinely.

Replace white bread with whole-wheat or other whole-grain; if your family won't go for that, at least buy the most nutritious white bread you can. Replace white rice with brown; if that won't fly, try mixing cooked brown rice with cooked white rice and calling it "pilaf." You won't be lying. Much.

Part of what makes junk food so attractive is its convenience, so make healthful foods just as convenient. Keep fresh grapes in a bowl on the counter. Slice up fruits and vegetables and keep them within easy reach in the refrigerator. Keep whole-grain crackers instead of chips in full view.

You can also hide the "good stuff" in something they like. Foods like muffins and quick breads, for instance, can be the repository for all sorts of things. Try preparing your homemade goodies with whole-grain pastry flour -- not bread flour -- which is made from a soft wheat that bakes up as nicely as all-purpose white flour but packs a stronger nutritional punch.

Blend dried or fresh fruit into your muffin batter. Use soymilk instead of dairy milk in baking. (Or use half soymilk and half regular milk; they'll never know the difference.)

To introduce more whole grains into your family's diet, try substituting some rolled oats for the flour in the muffin recipe; oats seemingly melt into baked goods, so they won't be noticeable. Add oats instead of breadcrumbs to your favorite meat loaf recipe.

Pizza is another place to hide nutrition, especially if the pizza's homemade, because cheese makes such a good cover for sliced or diced vegetables. If homemade pizza isn't on your timetable, beef up a frozen pizza and cover it all up with a little more mozzarella cheese.

A pasta-based dish is another great place to cloak unmentionable vegetables. For instance, try adding some diced zucchini, crookneck squash, or other vegetable to the pasta sauce or sprinkling it over the pasta as a garnish. Or use sliced black olives or tiny broccoli florets; sprinkle them with grated Parmesan or mozzarella cheese if you need to hide your additions.

Macaroni and cheese, tuna casserole, and ramen noodle soups also take on added oomph with the addition of some peas or sliced carrots.

Pancakes can conceal all kinds of good stuff as well. Add diced apple, sliced bananas, whole blueberries, or other fruits to the batter. Top them with fresh strawberries, and you've got one of those special dishes that looks like it came from the local pancake house.

And speaking of "hiding," buy lower-sugar or whole-grain versions of your kids' favorite cereals and store them in plastic containers to outwit the phenomenon known as "If I know what I'm really eating, I won't like it." (Ditch the empty box at the bottom of the recycle bin so you won't be found out.) Try this with crackers and other foods too. In most cases, your kids won't taste the difference-but it only works with foods that look like the "real" thing.

In a similar vein, if you're concerned about saturated fat, introduce ground turkey into your diet. Substitute it for ground beef in meat loaf, chili, tacos, and burritos; your family won't know the difference.

If you have small children, use your imagination to present food in ways that will humor them. By cutting broccoli into florets and referring to them as "little trees," I instilled a lifelong love of the vegetable in my two children. When they were three and five years old, the idea of eating "trees" tickled them, so they'd do it just for the laughs.

Likewise, they loved to eat things like wagon-wheel pasta-or any kind of noodle in different colors, for that matter-pancakes in the shape of Mickey Mouse's head, and pitted black olives they could stick on their fingertips. For the same reason, a sliced bagel was fun to carry around while eating, and Egg-in-the-Hole was a fascinating dish, because they got their egg and toast all in one neat package.

Decorated food is fun for kids too. Animal faces made from raisins or little pieces of fruit or sliced black olives can adorn everything from peanut butter on bread to pancakes. Get creative: Arms and legs can be made from carrot and/or celery sticks; baby carrots make big, funny noses; raisins, blueberries, or sliced black olives become eyes. Use your imagination.

The Soda Monster got his stranglehold on your family's palate? Make your own soft drinks by topping off glasses of real juice -- not juice drinks -- with bubbly soda water. Voila! All of the nutrition and none of the caffeine or sugar.

Or serve smoothies (and call them milk shakes). These can be as involved or as simple as you like. A sliced banana, a little vanilla extract, and a cup of milk whirled around in the blender is a real treat, even for a grownup. Add a handful of strawberries, and you've got one of those drinks they charge $4 for at the health food store.

Finally, there's a not-so-sneaky way to get more healthful food into your family's diet: Simply give them what they like. Ask every family member to make a list of the foods they love -- excluding junk food, of course -- and try to have that food available for that person as often as you can.

As the parent, you may think you can write the lists yourself, but you could be surprised by the answers you get. Do the same for meal ideas and try to incorporate those meals into your menu planning as often as you can. Since tastes change (particularly when you're dealing with children), periodically update your lists.