Why do People Choose Veganism? 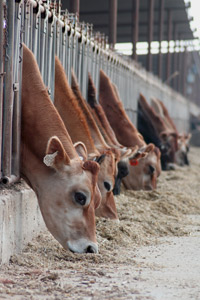 Vegans choose their diet for a variety of reasons. Many abstain from animal products because they find factory farming cruel and inhumane. Others believe that animal agriculture destroys the environment. And some simply view veganism as a healthy diet -- one inherently low in fat, calories, and cholesterol and high in fiber and vitamins.

Most vegetarians feel ethically unable to eat animals slaughtered for meat. Vegans also believe that factory-farmed egg-laying chickens and dairy cows lead unnecessarily miserable and brief lives. Egg-laying chickens raised in factory farms usually live in small cages with no room to stretch or walk. Although they can live more than a decade, most are slaughtered after two years.

Nonvegans who dislike factory-farm methods often choose free-range animal husbandry as an alternative. The United States Department of Agriculture requires that free-range chickens have access to an outdoor area. They do not, however, specify how much time chickens spend outside of pens and cages [source: USDA­]. Because of this loophole, vegans who choose the diet for moral reasons believe free range is unreliably humane.

Vegans also object to treatment of dairy cows. Like chickens, dairy cows are killed when their productivity rates drop. Cows can live up to 25 years, but most dairy cows die after five. Male calves, which have no value to dairy farms, are quickly sold and slaughtered in veal farms.

It takes a lot of land to grow food for livestock.
© Photographer: David Hughes | Agency: Dreamstime

Some people become vegans for environmental reasons. Animal agriculture requires vast amounts of land and water to support livestock and grow feed. The land conversion needed for pastures and feed crops leads to deforestation, soil degradation and a decline in biodiversity. The water used by animal agriculture, mostly as irrigation for feed crops, accounts for 8 percent of global human water use [source: Livestock, Environment and Development Initiative].

Enormous crops of corn or grain also require pesticides and fertilizers. The nitrogen in fertilizers contributes to algal blooms and creates ­dead zones.

­Methane, a greenhouse gas 23 times more powerful than CO2­, makes up the majority of livestock emissions. Animal manure contaminates water and releases antibiotics that may increase the resistance of some bacteria.

Vegans also believe that their diet uses land more efficiently and responsibly than animal agriculture. If people ate only plant-based food, there would be no need for the swaths of pastures and feed crops that support livestock. Agriculture would produce food directly for human consumption and use less land. The proteins and vitamins from animal products do, however, help sustain much of the world's poor -- people who might not have the resources to create and monitor a total plant-based diet.

Many vegans choose the diet purely for its health benefits. Although veganism requires supplements and professional consultation to meet dietary needs, most vegans can get all their nutrients without animal products. Vegan mainstay foods like whole grains, vegetables, fruits and legumes are naturally low in fat and cholesterol and rich in fiber, magnesium, potassium, folate and vitamins C and E. The American Dietetic Association reports that vegetarians and vegans have lower body mass indexes, blood pressure and cholesterol levels than nonvegetarians do. They also report decreased rates of type 2 diabetes, colon cancer, prostate cancer, hypertension and heart disease [source: ADA].

­In the next section, we'll learn about some of the controversies that surround veganism.­

Casey Kasem: DJ and the voice of Shaggy on “Scooby-Doo”