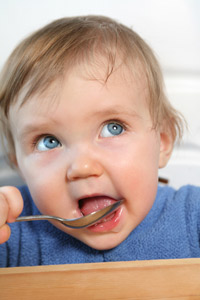 It is possible to raise a baby on a well-planned vegan diet.
© Photographer: Ieva Geneviciene | Agency: Dreamstime

Veganism is not an easy diet to maintain, nor should it be -- abstaining from animal products takes careful planning and consultation. But adults have a certain measure of security in any diet. Most notice weight gain, weight loss or even subtler conditions like anemia from iron deficiency. They are able to self-adjust before severe consequences set in. Infants, toddlers and pets, however, cannot control their own diets and have sensitive nutritional needs. For vegans who choose to extend their dietary beliefs to their children and animals, caution and medical consultation are crucial.

In April 2004, 6-week-old, 3.5-pound Crown Shakur died of starvation. His parents, who had fed him mostly soy milk and apple juice, insisted they had done their best while adhering to their vegan diet. Nutritionists, however, testified that it was not veganism that caused the death but neglect and ignorance -- the parents simply had not fed their baby enough. The jury agreed with the prosecution and convicted the parents of felony murder. Because the parents used veganism as their defense strategy, the case attracted an enormous amount of attention to the diet and to vegan children.

When parents raise infants and young children on alternative diets like veganism, there is no room for error. A well-planned and carefully executed vegan diet can, however, adequately support children. Most vegan mothers nurse their infants -- breast milk enhances the immune system, lowers the child's risk of infection and help prevent allergies. Breastfeeding vegan mothers take supplements to compensate for their vitamin D and B12 deficiencies. When breastfeeding is impossible, vegan formulas offer an alternative. Parents should never feed their infant homemade formula or nondairy milks, however, as they will not meet a baby's nutritional needs. Older vegan babies and toddlers can eat pureed fruits and vegetables, mashed tofu, soy yogurt and fortified soy, rice or oat milks.

Some vegans and vegetarians extend the diets to their pets. They feel that it is hypocritical to personally avoid animal products while supplying them to dogs and cats. Vegans who feed their dogs plant-based food call the pets veggie dogs. Veggie dogs eat specially formulated kibble or homemade meals. Some dogs dislike the diet, but many vegans maintain that their pets are as healthy and fit as other dogs.

Cats, however, have very strict dietary needs. They cannot synthesize vitamin A from plant sources and they need vitamin C and amino acids like taurine to be healthy. Although vegan cat foods contain supplements, the complexity of a cat's dietary requirements makes veganism difficult and potentially dangerous. Even vegan groups only tentatively support feline vegan diets.

Veganism is more than just a diet. We'll learn about the history of veganism, vegan cooking and the current state of vegan fashion in the next section.

Some vegans take their diet to extremes.

Practitioners of the Raw Food Diet eat only uncooked food. This can include animal products, but since most people believe it's a bad idea to eat raw meat or eggs, most followers are vegan.

The Fruitarian Diet only allows raw fruits and seeds. Fruitarians believe that fruits are nature's ideal food. They think eating fruits is a natural way to spread life and that killing vegetables is wrong.

Vegansexuals are people who follow vegan diets but who also avoid sexual intimacy with nonvegans.