Why is America One of the Only Industrialized Nations With No GMO Labeling?

by Sara Novak
NEXT PAGE 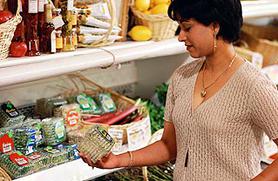 Do you take the time to stop and read food labels?
stockbyte/DCL

The LA Times documented a recent rally which occurred outside of a Chicago grocery store. But the protesters, adorned in hazmat suits with anti-GMO signs weren't outside of your average grocery store; they were outside of Whole Foods. Today because 93 percent of all soy, 86 percent of corn, and 93 percent of canola seeds are now genetically modified, Whole Foods claims that they can't ensure that all the foods they carry are not genetically modified. Though the Whole Foods brand is GMO free, so many processed foods contain them it's becoming hard to stuck shelves.

The Obama Administration has deregulated more genetically modified foods than ever. From plums to alfalfa and even much disputed sugar beets. But it's not just that so many crops are modified (165 million acres and counting) it's that there's currently no labeling system in place so that consumers know what they're buying. We are one of the few industrialized nations that doesn't require labeling of GMO foods.

In Europe all products containing more than .9 percent GMO are labeled as such. But in the US, there is no such standard. We would like to believe that our foods come from nature, but that's far from the case. Currently, 30 other countries have significant restrictions placed on GMOs.

The only system in place right now is the NON GMO Project. The NON GMO Project scientifically tests all of the individual ingredients that make up a product using a third party testing facility. But this is a non-profit multi-stakeholder collaboration and it's not government funded. Today many GMO-free foods carry its label.

On the next page, find out why there are no GMO labels.