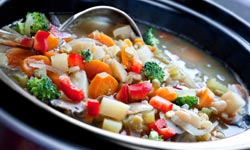 It's easy to load up crock pot recipes with too much sodium. See more pictures of easy weeknight meals.
©iStockphoto.com/Robyn Mackenzie

For busy people, slow cookers are a fantastic help. First, they cook all day so you don't have to. Second, their high-moisture cooking method turns cheap cuts of meat into mouth-watering delicacies. As an added bonus, they use a lot less energy than your oven does.

Slow cookers have improved in technology and style since their introduction in the 1970s. But if your slow cooker recipes are stuck in the disco era, they're probably packing more salt than the Dead Sea.

Eating foods with too much sodium is bad for your heart and your health in general. Most people eat lots more than the recommended maximum of 2,300 milligrams (about 1 teaspoon) of sodium per day. If you have high blood pressure, experts recommend cutting that to 1,500 milligrams or less.

Let's take a look at what's amping up sodium in your slow cooker meals while looking at where to cut back. You'll cook healthier meals, and you could save a few bucks, too.