Are we in a bananapocalypse? 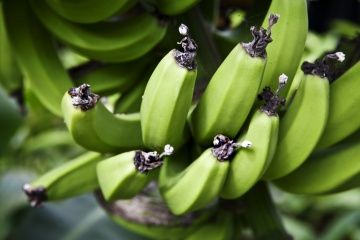 You can kiss all manner of Cavendish banana deliciousness goodbye if the fungus Fusarium oxysporum f. sp. Cubense (Foc) takes root on banana plantations in Latin America and the Caribbean.
Design Pics/Thinkstock

We've gone bananas for bananas. The average American eats more than 28 pounds (13 kilograms) of bananas annually, more than any other fruit [source: Zelenko]. This reality makes the impending "bananapocalypse" even more troubling.

Unlike rumors of the zombiepocalypse, the bananapocalypse is a real thing, at least for the world's most popular strain: the Cavendish banana. You may have never heard the name "Cavendish," but these are the bananas that are, to an overwhelming extent, most often sold in grocery stores.

A pathogen that first appeared in Asia and Australia, then migrated to banana plantations in Africa and the Middle East by 2013, has the potential to completely wipe the Cavendish off the face of the Earth. Latin America and the Caribbean are likely the next places on its hit list. This infestation would devastate the world's Cavendish banana supplies, as more than 80 percent of the world's exported bananas come from these regions [source: Butler].

Known as the Tropical Race 4 strain of the Fusarium oxysporum f. sp. Cubense (Foc) fungus, the blight is currently incurable and has wiped out entire stands of banana plants. Commonly called Panama disease, the fungal strain kills banana plants from within by infiltrating the stalk, eliminating their ability to absorb water and causing the leaves to wilt. Without their large leaves for shade, banana plants receive a deadly sunburn. And without water, they dry out. The double hit causes dead plants, an outcome that is magnified when entire plantations come under the fungus's fire.

Part of what makes the bananapocalypse a likely possibility is the ease with which the fungus is spread. The fungus travels to new targets through the movement of microscopic spores. These spores can attach themselves to the clothing or shoes of farmworkers, and show up in water sources or soil. When the fungus does take hold, it settles into the soil and can be nearly impossible to rid. Once soil is infected, the fungus can take decades to run its course [source: Zelenko].

Cavendish bananas are most at risk. An earlier version of this fungus, known as Tropical Race 1, is the reason you don't buy a banana called Big Mike instead. Tropical Race 1 all but wiped out commercial production of the cultivar some 70 years ago. The banana, larger and sweeter than the Cavendish bananas we've come to know and love, is now a little-known niche product.

There is hope, though. The fungus is slow to progress. Once spotted, it can be further slowed through the removal and destruction of infected plants. In addition, a few Cavendish plants have mutated and developed a partial resistance to the fungal strain. Other hybrids are being bred to withstand the onslaught [source: Butler].

If all else fails, banana growers may end up turning to yet another species -- one that is, at least for now, resistant to the fungus.