Does beer really make you fat? 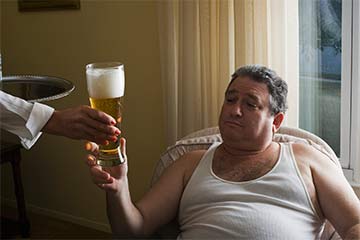 Ever wonder why they call it a beer belly?
Michael Greenberg/Digital Vision/Getty Images

It's one of marketing's cruelest notions: A television commercial starring beautiful people -- at the bar, the beach, the rooftop rave -- dancing, flirting, and looking fit and fabulous. And drinking beer.

The idea that a person can drink plenty of beer and maintain a stunning shape is a trope that simply won't die. When a six-pack of beer is involved, the reality is probably more muffin-top or beer-belly than six-pack abs. But is beer really to blame? More precisely, is it the combination of calories and alcohol in beer that's working against your waistline?

The 150 calories in your average beer may not seem so bad, but most people don't drink just one [source: Zelman]. That single beer can quickly turn into two or three. The influx of alcohol wreaks havoc on your appetite, too. You may have intended to order a salad with dressing on the side, but after your third beer, deep-fried hot wings sound so much better.

If this weren't bad enough, your body stops burning fat when it detects alcohol, creating a worst-case scenario for weight gain. When you drink beer, about 20 percent of the alcohol enters your bloodstream where it's eventually metabolized in your liver. Once your brain realizes acetate and acetaldehyde --byproducts of that metabolism -- are in your system, it stops burning fat and concentrates on ridding the body of these byproducts. Ironically, it also begins producing a different kind of fat that also is a byproduct of alcohol: acetyl CoA.

Because your body can only process a finite amount of alcohol per hour (15 to 30 milliliters or 1/2 to 1 fluid ounce), the more beer you drink, the more fat your body creates from acetyl CoA and the longer it takes to resume burning fat. For example, if a pint of beer contains 4 percent alcohol (or 22.7 milliliters), it will be at least an hour before fat burning starts up again. And, if you drink a six-pack (136 milliliters or 5 fluid ounces of alcohol), you won't burn fat for at least six hours [source: Men's Health].

This is bad news, especially for aging beer drinkers. Flagging hormone levels makes us more prone to storing fat around the waistline as we age, and drinking beer can compound the problem. The same "spare tire" phenomenon is true for those who drink beer and smoke cigarettes as well, and has been linked to a range of health problems, including type 2 diabetes, heart disease and high blood pressure [source: Zelman].

The effects of beer on aging could be one reason why most beer commercials seem to cast actors barely older than the legal drinking age: Fewer beer bellies to shoot around.