Is There a Mathematical Formula for the 'Beer Goggles' Effect? 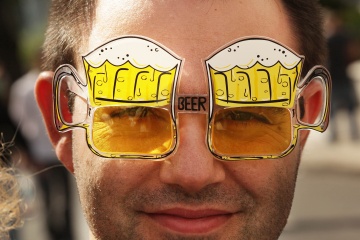 Many of us have heard of the so-called "beer goggle" effect. It's the phenomenon that occurs when someone's had a few alcoholic drinks and suddenly, all of those people who looked semi-attractive on entering the bar look really, really appealing. Scientists have shown that it's not just a lowering of standards -- alcohol actually stimulates the part of the brain that judges facial attractiveness.

In 2002, researchers at St. Andrews University and Glasgow University in Scotland took 80 college students and had half of them drink a "moderate" amount of alcohol -- between one and four servings, depending on gender and body weight. The other half, the control group, remained sober. Scientists showed each subject pictures of people of the opposite sex. In all cases -- male and female alike -- the experimental (tipsy) group rated each picture an average of 25 percent more attractive than the sober group did.

The effect can reportedly be traced to the nucleus accumbens. When you're looking at another human being, the nucleus accumbens is the area of the brain that decides how attractive that human being's face is. If you look at, say, George Clooney or Angelina Jolie, this area of your brain probably experiences increased neural firing. In other words, it's stimulated. As it turns out, alcohol, all by itself, stimulates the nucleus accumbens. So when you've have a few drinks, and you look at a face you may have judged as unattractive when you were sober, your brain, under the influence of alcohol, tells you that this face is in fact somewhat attractive. And the increase in perceived attractive seems to be directly proportional to the amount of alcohol consumed.

In a more recent study, this one conducted by researchers at England's Manchester University in 2005, scientists actually came up with a mathematical formula to calculate the extent of the "beer goggle" effect on a given individual in a given situation. Their reasoning for creating this formula is that alcohol is not really the only factor affecting the drunken perception of beauty. Other factors, according to their research, include:

The formula works out a "beer goggle" score ranging from 1 to 100+. When ø = 1, the observer is perceiving the same degree of beauty he or she would perceive in a sober state. At 100+, everybody in the room is a perfect 10.