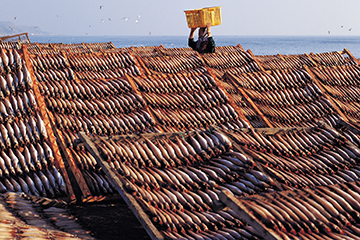 People still dry food like they did in the old days -- with good ol' solar power.
Jupiterimages/Photos.com/Thinkstock

Quick: You've got a doggie bag of leftover pizza and you don't want it to spoil. What do you do with it? The first thought in your head was probably "refrigerator." Certainly, that has been the go-to method of food preservation for most of the past 100 years. But before that, people had to do a little more than open and close a door to make their food last longer. The techniques they relied on — fermenting, pickling, curing and canning — are still around today, though their uses have evolved. The same can be said about dehydration, one of the oldest methods of food preservation.

Food dehydration was probably more of a discovery than an invention. Some unknown food pioneer likely noticed fallen fruit desiccated by the hot sun and realized it was still edible long after it dropped from the tree. The technique had caught on by 12,000 B.C.E., when evidence suggests that Egyptians were using the desert heat to dry fish and poultry [source: Shephard]. The sun continued to be the main dryer until the Middle Ages, when residents of cooler, wetter Europe began constructing buildings specifically designed to dehydrate food, which came to be known as stillhouses. Here, fruits, vegetables, herbs, and other foods were strung across a room and dried by the heat of a fire.

The next big development was mechanized dehydration, and for that we have French inventors Masson and Chollet to thank. In the mid-1800s, these old-school foodies developed a process by which vegetables were dried with air heated to 105 degrees Fahrenheit (40.5 degrees Celsius), then compressed into vegetable cakes [source: Prescott and Proctor]. That might not sound great to us, but to sailors of the time, the dried veggies were a welcome source of nutrition.

Since then, dehydrated food has fallen in and out of favor with the American palate. It got a boost in World War II, when the need for small and lightweight rations led to widespread use among combat troops. Back home, however, American housewives would have none of it. Aside from dried soups, potatoes and pudding, little of what was served on the front lines made it back home. Dehydrated food didn't make a comeback until the 1960s, when back-to-the-land campers and hikers once again discovered its excellent transportability [source: Lovegren].